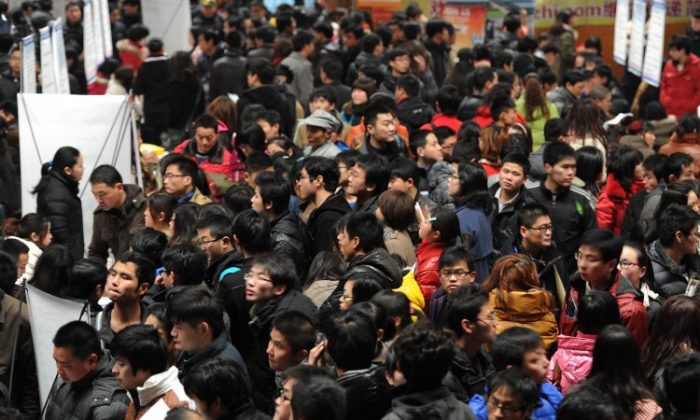 Thousands of jobseekers flock to an employment fair in Hefei, east China's Anhui province on Feb. 25, 2012. A report said the difficulties encountered by small and micro-sized enterprises since year are now spreading to large and medium-sized enterprises. (STR/AFP/Getty Images)
China

With China’s economy continuing to slide, private businesses are struggling to survive.

In Wenzhou City, which boasts numerous private enterprises, 60.4 percent of industrial businesses have either shut down or cut production, according to a report released by the Finance and Economic Affairs Committee of Zhejiang Provincial People’s Congress on July 27. The report is based on the economic data collected by the committee during the first 6 months of this year.

“I might quit at the end of this year,” Mr. Wu, the owner of a shoe-processing factory in Lucheng District, told The Epoch Times. “The current export market is not good, and there’s simply no domestic market.”

Sales are down at least 40 percent, and profits are down 70 percent, largely due to rising wages and raw materials costs, Mr. Wu said.

Mr. Li, owner of an eyewear manufacturing business in Wenzhou, told The Epoch Times: “I’ve been faced with considerable difficulties; prices and wages are rising, but taxes haven’t dropped at all … I tell you all plants are [facing] the same [situation].”

All Profitability Metrics Decline in 2012

The report stated that productivity has declined throughout Zhejiang Province, while production and operating costs continue to rise. In the first five months of 2012, the overall profits of enterprises in Zhejiang decreased by 19 percent, with 20.8 percent of the enterprises losing money. Meanwhile, loan interest payments were 42.5 billion yuan (approximately US$6.7 billion), an increase of 36.6 percent. Labor costs also increased by about 15 percent.

New orders are also on the decline. A quarterly survey of 1,000 enterprises by Zhejiang Province Economic and Information Commission shows that 42.9 percent of companies reported their second quarter orders had dropped compared to the same period last year.

The decline of Zhejiang enterprises has also led to difficulties for migrant workers. Many are seen sleeping on the sidewalks alongside Xiangshan Road, in the open space in front of the labor market, and on the riverside in Yiwu City, Zhejiang Province. Many of these migrant workers are quite old and lack skills. They often spend all their money before getting a job, so they have no choice but to sleep on the streets.

“The problem for the enterprises is insufficient domestic demand,” said Ms. Chen, a professional financial adviser based in Shanghai, and the owner of a chocolate factory.

There is an excess supply of many goods, she said. “My business last year was all right, but it isn’t good this year. Many products are still stocked up in the warehouse. Recently, a logistics company said it will shut down at the end of this year.” Ms. Chen said.

Due to poor coal sales, prices have dropped more than 25 percent since the middle of May when the price hit its apex this year. The coal produced in coal-rich provinces like Shanxi, Inner Mongolia as well as Henan and Shandong is being stockpiled and many enterprises are about to be shut down, according to a report by Sina last month.

During the first six months of this year, orders for China’s shipbuilding industry dropped substantially, and 2012 is shaping up to be the past decade’s worst year for orders.

Statistics released by the Chinese Communist Party (CCP) show that in the first quarter of this year, China’s economic growth was 8.1 percent, while the second quarter it was 7.6 percent. Many economists are estimating that China’s annual economic growth will be around 7.5 percent, which is the lowest since the mid-nineties.

Professor Frank Xie at the University of South Carolina, Aiken said due to the deformity of China’s economic structure, economic policy cannot solve the fundamental problems of the Chinese economy.

The CCP’s model of China’s economic growth depends on inflation, exports, and investment in infrastructure, which cannot be sustained, Frank added.

Since the CCP is unwilling to change its fundamental institutional problems—which cause polarization between rich and poor, and sluggish domestic demand—China’s economy can only turn further down from here. From a certain perspective, the hard landing of China’s economy has already begun. Frank predicted that the economic situation in the second half of the year will be more severe, and that more businesses will close down