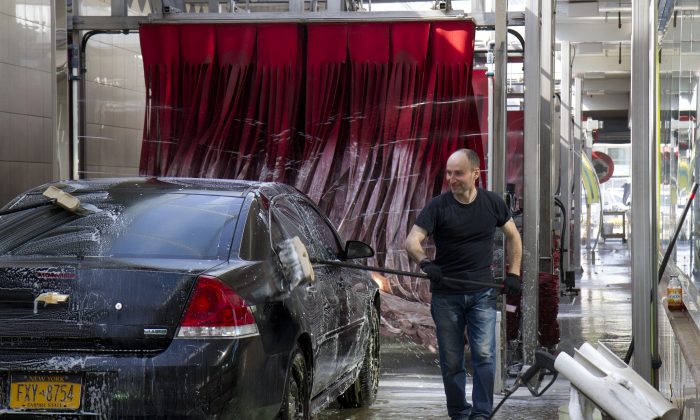 A worker, seen washing a car at Jomar Car Wash in Flushing, joined his colleagues to vote in favor of unionizing on April 24. Jomar Car Wash is the sixth car wash to unionize since Sept. 2012. (Samira Bouaou/Epoch Times)
New York

NEW YORK—A Thursday night vote for Queens car wash workers ended in a 23–1 count to unionize. Twenty five employees of Jomar Car Wash in Flushing will join the Retail, Wholesale and Department Store Union (RWDSU). The next step will be to negotiate a labor contract with the employer.

The vote marks the sixth car wash that the RWDSU has helped toward unionizing since September 2012, after launching a campaign to improve employment conditions for New York City car wash workers.

According to Make the Road New York, an advocacy organization for Latino and working-class people that has been involved in organizing for the union vote, the other car washes that have voted to unionize are throughout the city.

Four of the car washes that have started unionizing since Sept. 2012 were owned by Jomar Car Wash business owner John Lage and his partners. They own a total of 20 locations throughout the city and employ about 500 people. One of them, Soho Car Wash, shut down after voting to unionize.

“It’s very exciting for us,” said Miguel Portillo, who has worked at Jomar Car Wash for five years and says he now works 12-hour days. “We’re going to have a better future for us, for our families. It’s very exciting.”

According to the Flushing Chamber of Commerce, the Jomar Car Wash generates $1 million to $2 million in revenue annually.

Lage has had tangles with the federal government over labor issues in the past. According to the U.S. Department of Labor, between 2005 and 2009, judgements against Lage over labor violations resulted in more than $4.7 million payment in back wages, liquidated damages and post-judgement interest to over 1,300 employees.