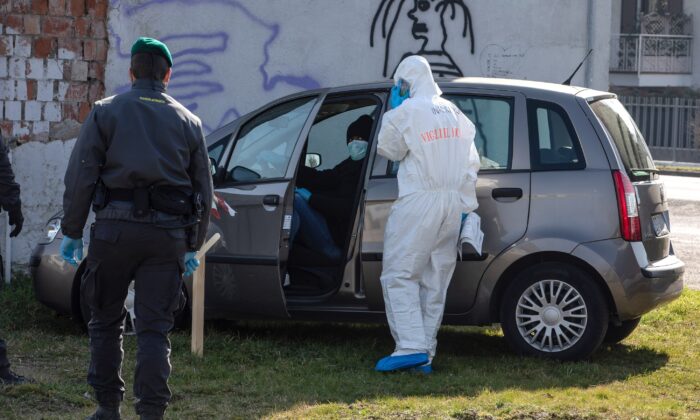 A rescue worker, wearing a protective suit, checks the medical conditions of a man who tried to reach a hospital driving his own car but was eventually stopped by Italian Guardia di Finanza (Custom Police) officers at a road block in Casalpusterlengo, Italy, on Feb. 24, 2020. (Emanuele Cremaschi/Getty Images)
Europe

Sixth Coronavirus Patient Dies in Italy as Cases Rise to 220

The sixth person to test positive for the new coronavirus died in Italy, authorities said on Monday.

Other deaths were also confirmed on Monday, including an 88-year-old man in Caselle Landi in northern Italy, Angelo Borrelli, the chief of the Protezione Civile, announced at a press conference, The Local reported.

The fourth death was an 84-year-old man in the town of Bergamo, which is also located in Italy’s Lombardy region.

All six patients who died were older than 75.

There are now 220 confirmed cases in Italy.

“Patient zero has not yet been found. It is difficult to predict the spread,” Borrelli told reporters over the weekend, RAI reported.

The number of cases in Italy is one of the highest in the world, behind only South Korea, China, and the cluster from the Diamond Princess cruise ship docked in Japan. Most of the patients have no history of travel to China, where the new virus, which causes the COVID-19 disease, emerged in December 2019.

Most other countries in Europe have few cases. Only Germany (16), France (12), and the United Kingdom (9) have more than two confirmed cases, according to the World Health Organization’s Feb. 23 situation report.

Russia, Spain, Belgium, Finland, and Sweden have reported one or two cases each.

The European Center for Disease Prevention and Control (ECDC) said in a statement Sunday that officials expect more cases in Europe in the coming days.

“As the situation is rapidly evolving, more cases are expected in Italy, and possibly in the EU, in the coming days,” ECDC Director Andrea Ammon said in a statement.

She said that the Italian authorities are identifying all contacts of the confirmed cases and have announced public health measures for containment, including suspension of mass gatherings, suspension of childcare and schools, and access to essential public services conditioned to the use of personal protective equipment.

The center is closely monitoring the situation in Italy and has been in contact with authorities there to provide assistance.

Authorities haven’t pinpointed the origin of the cluster but said a man in intensive care in Codogno shared a meal with another man who visited China last month, though the second man later tested negative for the new virus.

Much remains unknown about COVID-19 or the virus that causes it, including the source of the virus, the range of its transmissibility, and its severity index. The World Health Organization’s team of experts in China was heading to Wuhan, the epicenter of the virus, over the weekend and is attempting to find answers to some of the lingering questions.

Coronaviruses are usually found in animals but can, in rare cases, infect humans before beginning to pass from person-to-person. Experts say the new virus is being passed by people and that it can spread through close contact, through the air, and from touching contaminated surfaces.

Ways to avoid being infected include avoiding sick people, washing hands frequently, and not touching one’s nose, hands, or mouth with unwashed hands. There is no vaccine for the virus and no specifically known treatment. Clinical trials, primarily in China, are focusing on trying out treatments for other illnesses on virus patients, but none so far have been identified as being able to treat the disease.