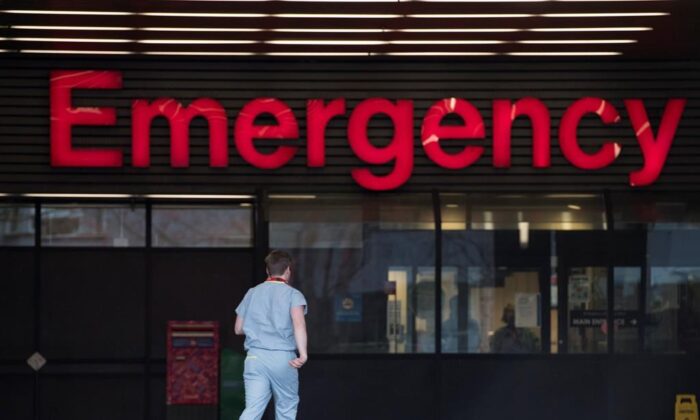 A health care worker is seen making his way into the Emergency dept. of the Vancouver General Hospital in a file photo. (Jonathan Hayward/The Canadian Press)
Canada

A sixth doctor in Canada has suddenly passed away this month.

Candace Nayman, a 27-year old doctor from McMaster Children’s Hospital (MCH) in Hamilton, unexpectedly collapsed while competing in a triathlon on July 24.

A statement by MCH on July 29 says that Nayman subsequently died on July 28.

“The entire MCH community is heartbroken over the tragic passing of Dr. Nayman, a pediatric resident. She embodied the excellence, caring, compassion and change-the-world attitude to which we all aspire,” the statement said. “We are sending love today to her family, friends and loved ones.”

Since Nayman’s death, MCH has organized a donation page in her honour. In May, the third-year pediatrics resident ran 135 km and individually raised $2,000 as part of the hospital’s Million Reasons Run over the month-long fundraiser.

“In her 27 years, she lived an active and full life through her love of world travel, frequent camping and outdoor adventures, passion for music and arts, and a wide network of friends, colleagues, and study partners,” the website said.

“Candace was a beloved sister and daughter, a friend and confidant, a mentor and guide, an athlete and coach, and an inspiration to many.”

On July 27, Trillium Health Partners (THP), which operates hospitals in Toronto and Mississauga, posted a statement on Twitter, informing the public of the sudden passing of three of its doctors.

“Dr. Jakub Sawicki, Dr. Stephen McKenzie and Dr. Lorne Segall were respected physicians who dedicated their lives to caring for their patients and community,” THP said in a statement.

“It is with deep sadness that THP mourns the loss of three of our physicians who recently passed away.”

A spokesperson at THP declined to provide details of the causes of the deaths, citing the need to protect the doctors’ health information.

Segall, a 49-year-old otolaryngologist at Credit Valley Hospital, passed away on July 17 after a “ridiculously unfair and hard fought year-long battle with advanced lung cancer,” his obituary reads.

THP said in another July 27 tweet that the rumour circulating on social media connecting the doctors’ deaths to the COVID-19 vaccine are “simply not true.”

Another GTA physician, Dr. Paul Hannam, who serves as the chief of emergency medicine and the program medical director at North York General Hospital, also died suddenly while out running, on July 18. Hannam was an Olympic sailor and marathon runner.

Similar to THP, the hospital said Hannam’s death has nothing to do with the vaccine.

“North York General Hospital can confirm that the tragic death of Dr. Paul Hannam was not related to COVID-19 or vaccinations of any kind,” the hospital said in a statement to the Toronto Sun, reported July 27.

The fifth case is a physician in Melville, Saskatchewan, who died unexpectedly on July 23.

According to the Saskatchewan Health Authority (SHA) and Emmanuel Health, Dr. Shahriar Jalali Mazlouman was “intelligent, hard-working, and a passionate physician.”

“There are not enough words to describe this incredible young man. His sudden passing is deeply felt by all who knew him and the communities he served in,” said Dr. Johann Roodt, interim physician executive of Integrated Rural Health at the SHA, in a statement on July 26.