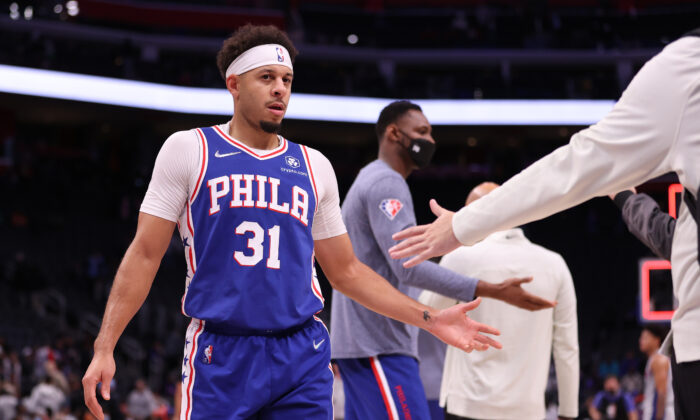 Seth Curry #31 of the Philadelphia 76ers celebrates a 109-98 win over the Detroit Pistons at Little Caesars Arena in Detroit, Mich., on Nov. 4, 2021. (Gregory Shamus/Getty Images)
NBA

Sixers Pull Away From Pistons for 5th Straight Win

Seth Curry had 23 points, Tyrese Maxey supplied 20 and the visiting Philadelphia Sixers pulled away from the struggling Detroit Pistons on Thursday for their fifth straight victory, 109-98.

Joel Embiid contributed 19 points and nine rebounds, while Shake Milton tossed in 16 points with eight rebounds and five assists. Georges Niang chipped in 14 points and seven rebounds off the bench for Philadelphia, which played without starters Tobias Harris and Danny Green.

Jerami Grant had 27 points, six rebounds, and four assists for the Pistons, who were limited to 32 second-half points. Cade Cunningham, the top pick of the draft, recorded his first double-double with 18 points and 10 rebounds despite 4-for-17 shooting from the field. Kelly Olynyk added 11 points and Killian Hayes chipped in 10 for Detroit, which has won just one game.

Grant scored 22 first-half points as the Pistons grabbed a 66-63 halftime lead. Curry led the Sixers with 18 points with both teams shooting better than 52 percent from the field before the break.

Detroit committed just two first-half turnovers, but that quickly changed in the third quarter. Philadelphia opened the second half with an 11-2 run, including five points from Curry. The Pistons had three turnovers in the first four-plus minutes, including two by Cunningham.

The rookie then knocked down his first career 3-pointer on his 19th attempt. After the Pistons pulled within one, Maxey went on a personal 6-0 run to increase the Sixers’ lead to 80-73.

Philadelphia carried an 86-82 lead into the fourth.

The Sixers then took control with an 11-0 run to start the quarter. Niang scored nine of those points, including a pair of 3-pointers. The Pistons contributed to their demise with a couple of turnovers.

Grant had a three-point play to end the drought. A couple of Cunningham free throws cut Detroit’s deficit to eight points, but Philadelphia responded with an 8-0 run. Embiid hit a fadeaway jumper and two free throws, while Maxey had a steal and layup in that span.