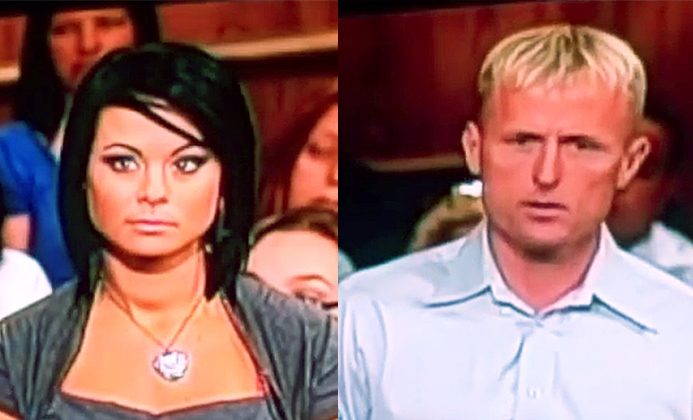 Michelle Parker (left) and Dale Smith appear on “The People’s Court” televisions show on November 17, 2011. Parker disappeared a few hours after the show aired and has not been seen since. (Screenshot/The People’s Court/YouTube)
Crime and Incidents

Michelle Parker was a busy bartender supporting three children when she got a chance at nationwide notoriety.

Parker, 33, appeared on an episode of TV’s “The People’s Court” where her former fiancé sued her for the cost of an engagement ring.

Despite agreeing to appear on the show, which taped in August of 2011, Parker was ambivalent about the kind of celebrity she would be achieving. She was embarrassed that the whole world would see her, the mother of an 11-year-old and three-year-old twins, arguing with her ex about an incident in which she lost her temper and threw away his engagement ring.

The episode aired at 2 p.m. on Nov. 17, 2011. Instead of staying home to watch it, Parker drove her twins to the home of her ex-fiancé, Dale Wayne Smith, for a previously arranged visit at his Orlando condominium.

Smith, then 40, was the father of the two children. He was supposed to watch the children while Parker worked at her bartender job at The Barn restaurant in Sanford, Florida.

Parker never made it to work that night. She has not been seen by anyone since.

When Parker failed to show up for her 7:30 shift, her brother Dustin sent her a text, asking where she was.

He got an immediate one-word answer: “Waterford.”

This made him suspicious because his sister never responded curtly to texts.

Detective Michael Moreschi of the Orlando Police Department, told Fox News, “There is no way that she left [the area] voluntarily, or that she left without a fight. Her children were her life.”

Parker drove a Hummer H3, a distinctive and conspicuous vehicle. Her Hummer showed up in a police red-light video at the intersection of Vineland and Conroy roads at 8:55 p.m. on the night she disappeared. While it was unmistakably her vehicle, someone had peeled off the window decals advertising Parker’s mobile tanning business. The intersection is about seven miles west of Smith’s home.

“At that point we don’t believe that she’s driving the car,” said Moreschi.

Police found the vehicle parked in a parking lot at the Mall of the Millennia on Nov. 18. The car was parked about five miles west of Smith’s home.

Though police say the case is still open and Smith is their main suspect, so far they do not have any solid evidence against him.

The episode of People’s Court that aired on the day of Michelle Parker’s disappearance might have embarrassed her, but it showed her former fiancé in a far worse light.

The gist of the case was that Dale Smith was suing Michelle Parker, his fiancée—with whom he had two children—because during an argument she threw her engagement ring at him. The ring sailed over the edge of the hotel balcony where the two were arguing and was never recovered.

Parker painted an unflattering picture of her former fiancé, calling him “hot-tempered,” and accusing him of abuse.

“He gets pretty malicious and vindictive,” Parker told Marian Milian, the former judge who hosts the TV show. “And he’s a mean person, especially when he’s been drinking.

Smith has a history of violence against women. He was dishonorably discharged from the U.S. Marines for a domestic violence and for dealing drugs, Fox News reports.

Family Has No Peace

Dale Smith was awarded custody of the two children he had with Parker—twins, a boy, and a girl. He eventually left Florida, and even though he is still considered the prime suspect in the case—a case that Orlando-area media revisit every year around its anniversary—it seems unlikely he will ever be legally connected to it after so many years.

In a letter to WESH News written on the fifth anniversary of Parker’s disappearance, the Parker family said, “Year after year, as it turns out to be, our hearts remain broken as the day it happened. Michelle’s twins have now spent more of their life without her than they did with.”

In response to the petition for visitation rights, Smith’s attorney Stephen Calvacca said there was no reason to assume Smith had anything to do with Parker’s disappearance.

“There’s no bodies. To assume there was a homicide, that she is dead, is an assumption,” Calvacca told WESH News.

When asked if he thought she simply ran off and abandoned her three children, Calvacca replied, “She could have. They searched extensively for her. People do run away.”

Yvonne Stewart also filed a wrongful death lawsuit against Smith in March 2013. With no evidence of a crime committed, she had no hope of winning.

Stewart told WESH she filed the suit to get Dale Smith on his family members on the stand, under oath, to try to get some honest answers.

“Michelle is still missing. And I want answers. And this is how we’re going try to get them,” she said.

Earlier in 2013 Smith had moved out-of-state, taking the twin children with him. Stewart claimed that had nothing to do with the timing of her lawsuit.

A Facebook group, Michelle Parker Missing Person, serves as a clearinghouse for information and a place for friends to mourn and remember their missing friend.