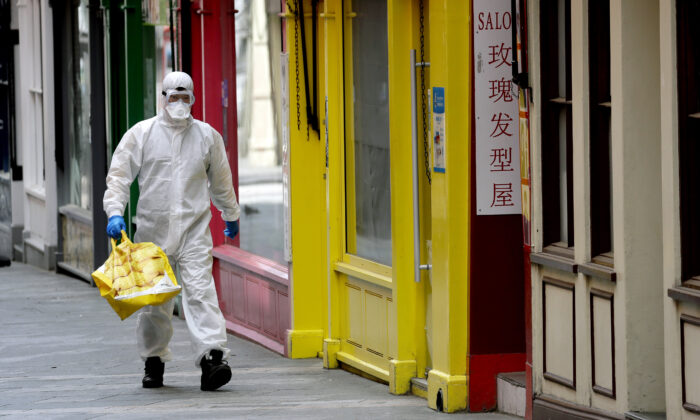 A man wears full protective equipment to protect against the CCP virus as he shops in London on May 4, 2020. (Kirsty Wigglesworth /AP Photo)
WORLD

Authorities in the UK confirmed a 6-week-old infant died after testing positive for the CCP virus, becoming one of the youngest victims anywhere in the world to succumb to the disease.

National Health Service (NHS) England said the baby was among 332 fatalities who died after testing positive for the virus over the past 24 hours, according to The Guardian. The baby is believed to be the youngest person in the UK to die from COVID-19, although it is not clear if the child had any underlying health problems.

In the UK, as of May 6, more than 30,615 have died of the CCP (Chinese Communist Party) virus, a novel coronavirus that emerged in China and causes COVID-19, according to the NHS.

It comes as Prime Minister Boris Johnson is expected to deliver an address on Sunday at 7 p.m. about a “roadmap” to “unlock the various parts of the UK economy.”

He remarked this week: “We have come through the peak, or rather we’ve come under what could have been a vast peak as though we’ve been going through some huge alpine tunnel and we can now see the sunlight and pasture ahead of us.”

“And so it is vital that we do not now lose control and run slap into a second and even bigger mountain,” he said.

In March, an infant in Illinois died of the CCP virus, becoming the youngest known victim to die at the time in the state.

“I know how difficult this news can be, especially about this very young child,” Illinois Gov. J.B. Pritzker said at a news conference at the time, adding that “we should grieve for a sense of normalcy we left behind just a few short weeks ago.”