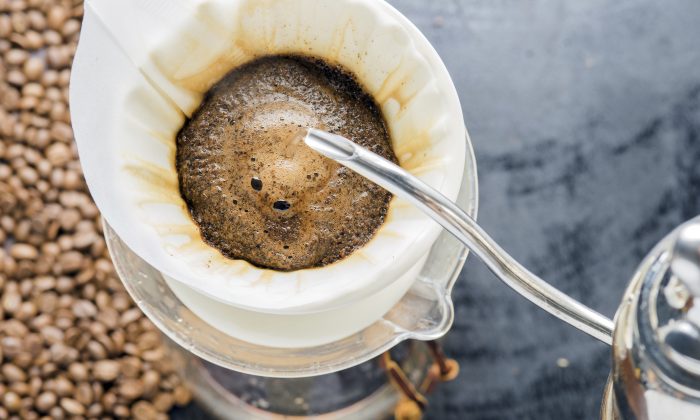 Many of us depend on coffee to fuel our early morning meetings, midafternoon slumps or all-night study sessions. These days, the words “coffee” and “fuel” are half-jokingly synonymous. More than 9 million tonnes (almost 10 million tons) of the bean are produced annually around the world and, once we brew it, an awful lot of waste is created. The vast majority ends up in landfill.

Researchers in South Korea, however, have discovered a way of using coffee ground waste as a fuel in a far more literal sense. In a study in Nanotechnology, they report using coffee waste to produce a carbon material full of small pores, which increase the surface area, known as “activated” carbon. This new material is capable of absorbing and storing methane and hydrogen, both of which can be used as fuels.

While the ability to store these fuels from such a cheap material is a great step toward making this technology more viable, it also provides an environmental advantage: methane is a harmful greenhouse gas.

This is by no means the only use for waste coffee grounds. As a relatively pure and essentially free waste stream, scientists, engineers, and entrepreneurs have looked into various ways of putting it to use.

For a few years now, Nestlé has been using waste coffee grounds from its instant soluble coffee production as thermal fuel. It currently uses coffee to cook the food it produces in more than 20 factories globally, displacing more than 800,000 tons of coffee grounds each year that would otherwise go to landfill.

In a more specific enterprise, the London-based company Bio-bean is trying to turn waste from local instant coffee producers (nearly 200,000 tonnes in London and southeast England alone) into biomass pellets for power generation, as well as residential heating using trendy biomass burners. These beans burn more cleanly and contain 50 percent more energy than traditional wood pellets. However unlike Nestlé, Bio-bean first removes oil from the coffee, which brings us to our second point.

Like most plant seeds, the coffee bean contains a significant amount of oil, which can either be squeezed out or chemically extracted. It can then be converted into biodiesel, a liquid with similar properties to that of regular diesel.

My own research found coffee-derived biodiesel wasn’t affected by where the coffee was grown, the type of bean, or how it was brewed. This is a great plus as it means the coffee-derived fuel will give off a predictable and consistent amount of energy when burned.

Coffee grounds can also be fermented to produce ethanol or subject to extreme heat and pressure in order to create bio-oil, a material similar to crude oil. Both processes, however, are expensive. Biodiesel is the only fuel that seems to be viable on a larger scale, hence Bio-beans’s endeavors to commercialize it.

Coffee contains a number of chemicals that, when isolated and purified, can serve very specific uses. Examples include chlorogenic acid, a food additive that slightly lowers blood pressure; trigonelline, which helps prevent and treat diabetes and central nervous system diseases; polyhydroxyalkanoates, which are used to make bioplastics; and a wide range of antioxidants, which can be used in healthcare or added to fuel and lubricants to lengthen their lifetimes.

Coffee grounds are rich in nitrogen, a vital nutrient for plant growth. This is known by a number of coffee shops, which will provide their used coffee to customers who request it. It reduces their waste, and might be tipped into organic, caffeine-infused fruits and vegetables. What barista could say no to that?

Waste coffee is even effective at soaking up harmful “heavy metals” such as chromium, copper, nickel, or lead, which often leak out of chemical plants, farms, or factories and cause significant damage. In specific lab conditions waste coffee has been reported to remove up to 91 percent of heavy metal ions from solution—a good example of potential environmental benefits.

Most complex of all, researchers have investigated using coffee to make supercapacitors—electrical stores capable of holding more power and more charge cycles than traditional batteries. Ultra-thin porous carbon nanosheets have been produced with good electrical properties.

Whether it’s used at home as garden compost, in lab for research or even in industrial fuel production, there are clearly lots of uses for waste coffee. This huge variety could potentially be a negative thing. After all, how do you decide what to do with something so versatile?

One thing is for sure, however. We certainly shouldn’t be throwing it away.

Rhodri Jenkins is a postdoctoral researcher in biofuels at the University of Bath, U.K. This article was previously published on TheConversation.com