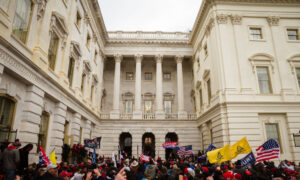 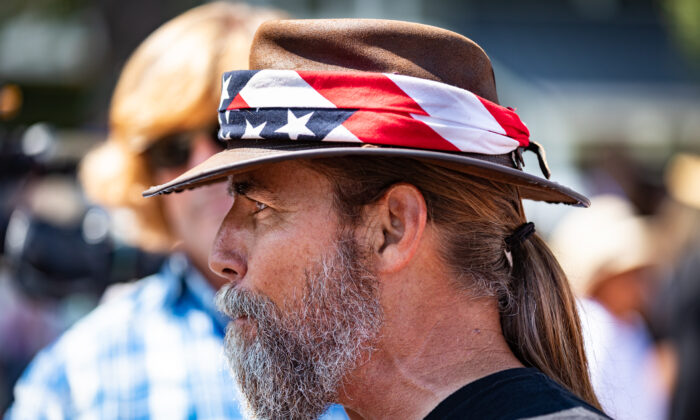 Former La Habra police chief Alan Hostetter tells an ABC7 cameraman that "media is the virus" as people gather in front of the Orange County Department of Education to rally support for the reopening of California schools. (John Fredricks/The Epoch Times)
Southern California

Two Orange County, California, men and four others from Southern California are facing charges in connection with the Jan. 6 Capitol incident.

Former La Habra police chief Alan Hostetter, who now lives in San Clemente, was charged June 10 by a grand jury indictment with attempting to obstruct an official government proceeding, which was the certification of the Electoral College vote.

Hostetter, now a yoga instructor, led multiple Orange County protests in 2020 against government-mandated COVID-19 restrictions. He spearheaded “Stop the Steal” rallies in various Orange County cities pertaining to the 2020 presidential election outcome. He also started the American Phoenix Project, which describes itself as being created due to “the fear-based tyranny of 2020 by manipulative officials at the highest levels of our government.”

All of the men have been charged with attempting to obstruct the certification of the Electoral College vote, knowingly entering a restricted building or grounds without lawful authority, and other federal charges.

During Hostetter’s court hearing on June 10 at a federal court in Santa Ana, his attorney Bilal Essayli said that Hostetter had turned himself in to the FBI after the indictment, and that while he was on the steps of the Capitol, he didn’t enter the building.

The indictment document accuses Hostetter and Taylor of joining “rioters on the lower West Terrace of the Capitol who were pushing through a line of law enforcement officers trying to hold them back.”

After pushing up through the area that had been blocked by law enforcement, Hostetter and Taylor moved up the stairs erected for the inauguration, the document said. Once on the upper West Terrace, Hostetter allegedly said, “The people have taken back their house. … Hundreds of thousands of patriots showed up today to take back their government!”

In a video response posted to his personal Facebook account on June 10, Hostetter thanked his supporters for not giving up on him and said the mainstream media was not portraying him fairly.

“The feds decided to indict me today for the January 6 ‘incident,’ I will call it. You’ve heard me call it the ‘fake-surrection’ now in many of my podcasts, and I still continue to believe that this is going to be proven to be the case, eventually,” he said.

“We had a very fair judge today in this initial hearing. I’m back home right now and everything is fine. I plan on fighting and fighting and fighting like I always do, and having my day in court, because what you have seen publicly portrayed in this indictment, I don’t want to go too overboard, but I’ll just say that there is a whole lot more to this story than meets the eye.”