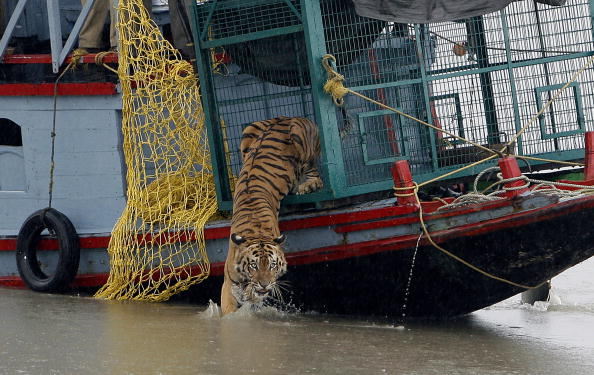 A male Royal Bengal Tiger leaps into the water after it was released from a forest department boat on the River Harikhali in The Sunderbans delta forest, some 150kms south of Kolkata, on July 22, 2009.(STR/AFP/Getty Images)
Environment

Camera traps installed in Sunderbans have detected the presence of six new tigers. This comes soon after two tigers were seen outside the reserve area; thereby reassuring that the tiger population in the world’s only mangrove habitat of the wild cat is stable.

Four among those big cats are female. According to forest officials, this means that Sunderbans has a healthy breeding population. The tabulated final count of tigers is likely to be known by the end of the year. Till date, eight tigers have been detected by the camera traps; two of which are outside the reserve area.

The discovery of the new felines was made in the National Park East range of the mangroves, comprising the forests of Baghmara and Chamta.

“A total of 19 tigers have so far been found in this range, of which six are new and the rest were photo captured during the same exercise last year,” said a senior official of WWF-India’s Sunderbans chapter.

Chief wildlife warden Ujjwal Bhattacharya said the findings show that the tiger population in the Sunderbans is very much stable.

“Tigers are great wanderers and have huge home ranges and territories. Images of new individuals in the Sunderbans drive home the fact again. While new tigers will come and make their own territories, some will either move out on their own in search of food or may be driven out by new individuals commonly known as outsiders,” he said.

Last year the number of tigers in Sunderbans was found to be 103 and the recent finding may signal that the numbers might be more now.

Additional PCCF Pradeep Vyas said, “These new big cats didn’t appear before the cameras last time. So, this is a positive sign as far as tiger population here is concerned.”

Forest officials are not saying anything conclusive as yet and prefer to wait for the numbers to trickle in from all the ranges.

“At the moment, we can say that the population trend is stable. After compilation of images from all the ranges – National Park East, National Park West, Sajnekhali and Basirhat – we can say whether it is rising. For now, sighting of new individuals definitely brings hope for the future,” said STR field director Soumitra Dasgupta.

During the census last year, 26 big tigers were found in the National Park East range. This year, the officials started their exercise in the month of March and laid 60 pairs of trap cameras across the range covering almost 700 square kilometres area. “We will conduct the same exercise in Sajnekhali and Basirhat after the monsoon. By the end of this year, you can expect the figure for the entire mangroves,” said an official of WWF-India.

The camera-trap exercise for the National Park West range is being conducted by the officials of Wildlife Institute of India (WII).

This article was originally written and published by Ramya Naresh, a contributing writer for indiasendangered.com. Please click HERE for the original article and more information.