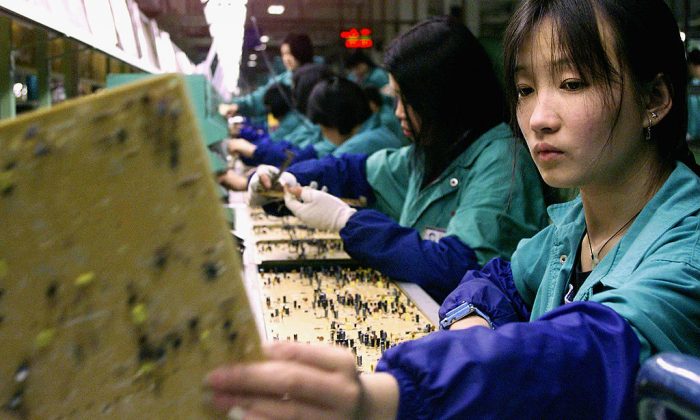 Taiwanese firms that have significant China operations are beginning to make a return to home base.

Taiwan’s Ministry of Economic Affairs recently approved six Taiwanese companies’ investment plans on the island; all of the firms had production bases in mainland China. Total investments from these six companies exceed NT$30.8 billion ($1 billion) and will add more than 1,200 jobs.

The Taiwanese government has been encouraging Taiwanese companies to return home to invest since the beginning of the year.

The Ministry of Economic Affairs launched a “welcome back” program on Jan. 1, providing incentives such as free rent for the first two years, favorable bank loans, and access to tax consultation to them.

Since the program’s launch, 30 Taiwanese companies have decided to move back to Taiwan from China, bringing combined investments valued at NT$120 billion ($3.9 billion) and promising 15,000 jobs to local workers.

The Ministry of Economic Affairs said in its statement that these six companies are all bellwethers for their respective industries. It added that China’s ongoing trade war with the United States—in which the latter has imposed punitive tariffs on more than $200 billion worth of Chinese-manufactured goods—has made these Taiwanese firms more determined to stay on the island, as they had established their factories in mainland China and faced revenue losses due to the U.S. tariffs.

Sunspring Metal, the world’s largest maker of zinc alloy faucet components, is based in Taichung City, Taiwan. It owns more than 60 percent of the market share in North America and Europe.

Impacted by the U.S.–China trade war, the company decided to invest NT$1.6 billion ($51.8 million) to build new plants and automation warehouses in the Central Taiwan Science Park, which will help expand its production lines and generate about 100 new jobs.

Tong Yang is the world’s largest manufacturer of car metal sheets and bumpers, with 25 production bases around the globe. Its products include a wide range of car plastic and metal parts, cooling systems, coatings, and mold design. Tong Yang plans to expand its after-sale repair and maintenance services in Taiwan, to increase its market share in the repair service market.

The company’s NT$4 billion ($130 million) investment will be used to increase the production capacity of car plastic and metal parts at its Tainan City headquarters, which is expected to add 163 jobs.

Repon Industrial, a manufacturer of ball bearing slides—commonly placed inside cabinets for slidable drawers—has three production bases in Taiwan and China. Due to growing demand from foreign customers to adjust its supply chain after the United States imposed tariffs on China-made goods, the company plans to upgrade its automated production lines at the Yunlin County industrial park located in western Taiwan, in addition to adding new production lines at a separate factory in Yunlin County, and setting up a factory and R&D center at the Jhongli Industrial Park in Taoyuan County up north. Investments will total NT$1.8 billion ($58.6 million).

Johnson Health, a top manufacturer of fitness equipment, is well-known for its three equipment brands, Matrix, Vision, and Horizon.

The company decided to invest NT$895 million ($29 million) to build a new plant for the production of treadmills and exercise bikes, as well as a robot-enhanced warehouse next to its existing plants in Daya District, Taichung City. This is expected to bring 100 new jobs.

Yageo, the world’s largest manufacturer of chip resistors, a type of electronic component, with a global market share of 34 percent. It has an R&D center and a high-end product manufacturing base in Kaohsiung City located in southern Taiwan. It also has 19 additional production bases, 14 R&D centers, and six JIT (just-in-time, an inventory management method) warehouses around the globe.

Another electronic component manufacturer also decided to restructure its global industrial supply chain amid the trade war, while expressing the desire to prevent technology outflows to China. It will invest NT$6 billion ($194 million) in Taiwan, adding 165 jobs.

About 50 other Taiwanese firms are currently considering returning to Taiwan, according to the Ministry of Economic Affairs.