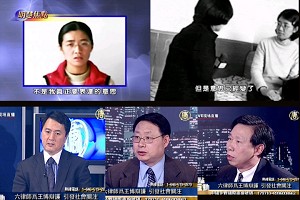 On April 27, Falun Gong practitioner Wang Bo, sentenced to a five-year prison term without legal justification, was joined by six Beijing defense attorneys and her parents at the Shijiazhuang City Intermediate Court in Hebei Province. The defense argued on behalf of her freedom of belief and human rights.

One of Wang's defense attorneys, Teng Biao, joined the discussion online, briefing the panel on the background of the case. Teng is the defense lawyer for Wang's mother, Liu Shuqin.

The following is a transcript of the discussion.

Teng Biao: Here is a summary of Wang Bo's case: Wang Bo was sent to a labor camp for holding a Falun Gong banner on Tiananmen Square in 2001. In 2002, CCTV—the Chinese Communist Party's official television station—broadcast an influential episode of their “Focal Point” program claiming that Wang Bo was convinced to give up her practice.

In 2005, Wang posted an online video she made documenting her forced brainwashing experiences. Due to this posting, as well as various Falun Gong related materials found at her house, the Changan People's Court sentenced her and her parents to four and five years imprisonment respectively.

During that initial trial, the family was unable to find any lawyers who dared to defend them. With the second trial, six lawyers, including myself, took on this case.

Host: There are very few lawyers in mainland China who defend Falun Gong practitioners. Attorneys Guo Guoting, Yang Zaiyin and Gao Zhisheng were all persecuted. They were fired from their respective firms, or had their firms closed down, they lost their license, or were even exiled.

Why do you and these other five attorneys dare to stand up for and defend this Falun Gong practitioner?

Teng: I think Falun Gong practitioners have fundamental rights. The constitution also acknowledges freedom of belief. So I feel that they have the right to obtain legal counsel. I think suppressing freedom of speech and freedom of belief is a very serious problem.

The long-term suppression and persecution of Falun Gong, which has continued to escalate since it began in 1999, has now hit a critical point, falling far below the line of fundamental humanity.

In the face of this persecution, intellectuals and attorneys in mainland China remain silent for various reasons. This kind of silence is unconscionable, and that is why we're here to defend Wang Bo.

Host: Thank you, Mr. Teng. Could you please tell us about the situation in court?

Teng: First of all, this is the second hearing being held on this case, which is a bit abnormal. In China, whether it's Falun Gong or another criminal case, a second hearing is very rare.

What's even more interesting is that one of the prosecutors even threatened the defending counsel, condemning the idea that practicing Falun Gong is a legal right and freedom. The prosecutor went on to condemn the belief in Falun Gong.

Host: As the attorney for Wang Bo's mother, Liu Shuqin, I would assume that you know her pretty well. Could you tell me a little bit about her and describe the physical torture she endured in the prison?

Teng: As for the charge on Liu, the evidence against her is very ridiculous. It includes a photo saved on her camera and a letter wrote to a neighbor a few years ago. This evidence is simply invalid.

When I first met her at the detention center this March, she told me about the physical torture she endured in prison. Alone in a room, her hands and feet were tied to two iron columns and she was not allowed basic hygiene or use of the restroom.

The day before the court hearing when I went to see her again, she told me that from March 19 to April 9—over 20 days—she remained tied to the wall, hanging on these iron columns. Because of this inhumane treatment, she went on a hunger strike to protest. On April 9, they untied her.

Host: Thank you, Attorney Teng. Attorney Ye, Teng has just given us a brief introduction of this case. As a lawyer having worked both in China and in the States, what are your thoughts on this?

Ye Ning: First of all, I'm proud of my colleagues. I think they finally stood up and have set an example for other lawyers to follow. They have embodied the ethics and courage so important in this profession.

Since the Chinese Communist Party (CCP) came to power, it has unceasingly suppressed various dissident and religious groups. Such persecution has precedents, but Falun Gong practitioners' unbreakable spirit of resistance since the persecution against them has no precedent in China's history.

Hence, I feel it is a remarkable beginning that these six attorneys are able to bravely step forward under the CCP's severe persecution.

Host: I would like to ask Mr. Yang Jingduan, is Wang Bo's case typical among Falun Gong persecution cases?

Yang Jingduan: I think the case of Wang's family is a typical one. Before the persecution started, they had a very happy family. The practice of Falun Gong brought harmony to their family and helped Wang Bo improve in both her study and morality.

However, when the persecution began, their family suffered like so many other Falun Gong practitioners. They initially appealed to the government out of trust, only to be arrested, beaten, stripped of their CCP membership and dismissed from work. Especially for Wang Bo, who was only 19 at the time, she was deprived of sleep for 15 days and nights, forced to wear prisoners' uniform and forcefully brainwashed.

In fact, typical in many of these cases, the family actually managed to break away from this forced suggestion, holding firm to their belief, and bravely exposing to the world the torture they had suffered.

Host: Thank you. Let's check in with our audience for questions and comments. We have Mr. Yang on the line from New York. Mr. Yang, please go ahead.

Yang: Hello everyone. First I would like to thank NTDTV for hosting a program that discusses such important issues. And allow me to express my highest admiration for Wang Bo, her family and the their six attorneys.

I am happy to see that there are many people calling for morality, especially Attorney Gao. When he said, “The weapon we use is not a gun or a knife, but morality,” I felt this was a critical moment in history.

Host: We now have an audience member from Mainland China on the line. Mr. Wang, please go ahead.

Mr. Wang: I am not a Falun Gong practitioner and I have never practiced Falun Gong or seen anybody who practices before. But after watching this I would like to say that although the Chinese government has labeled them a cult, the CCP itself is in fact the biggest cult. Ok, bye.

Ms. Yang: Hello everybody. First, I would like to salute the six Beijing attorneys and attorney Gao Zhisheng. I think they are truly remarkable. They dare to risk their own lives to defend people.

I am not a Falun Gong practitioner, but I have witnessed the persecution taking place. Alas, I feel so sad when I see these practitioners being persecuted.

I hope all lawyers, men of insight, and people of conscience around the world can step forward to expose this crime and put an end to the CCP. Thank you.