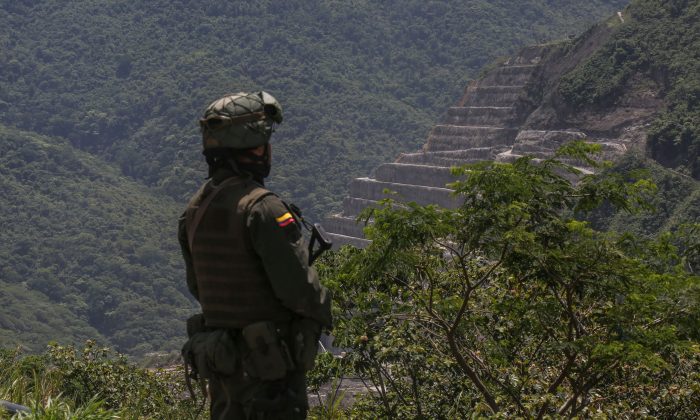 A Colombian soldier stands guard in a file photo. Six people were killed in the remote town of Mapiripán on Dec. 17, 2018. (Joaquin Sarmiento/AFP/Getty Images)
Americas

BOGOTA, Colombia—Six people were killed on the evening of Dec. 17 in the remote Colombian town of Mapiripán in an incident the army suspects was related to drug trafficking. The victims, among them one minor, were confirmed dead the next day by President Ivan Duque who condemned the incident via social media and dispatched emergency troops to the area.

The town lies in the country’s eastern plains and forms part of a drug trafficking route to Venezuela currently fought over by both former guerrillas and paramilitaries. It is also synonymous with one of the Colombian conflict’s most atrocious massacres to date when paramilitaries butchered at least 13 people with machetes and chainsaws in 1997. The gruesome manner in which the incident took place, along with the disposal of the butchered corpses in a nearby river, means a reliable death toll was never established, but could be as high as 77.

Mapiripán was described by the government as “a benchmark of resilience, opportunity, and progress” in June of this year following the 2016 peace accord with the Revolutionary Armed Forces of Colombia (FARC). The agreement formally ended a conflict estimated to have left more than 260,000 dead and 7 million displaced. The observations were attributed to a boom in investment and employment in African palm production, but now appear gravely premature.

The accord has lowered homicide rates across the country but its slow and spotty implementation has left certain demographics and areas of the country more vulnerable to violence.

At least 120 social leaders have been killed this year alone, according to the Washington Office on Latin America (WOLA), potentially making 2018 the deadliest year for labor or human rights defenders since the accord was signed in 2016. Human rights advocacy groups denounced the incident in Mapiripán, the fourth massacre recorded this year.

“What happened has made us incredibly sad as we have a lot of faith in the peace process,” Blanca María López, a social leader in Mapiripán under state-protection, told the Epoch Times. “We are awaiting a true explanation from the authorities; we hope the peace process is not going backwards”.

López described the incident as a “terrible reminder” of the massacre in which she lost friends and neighbors in 1997. “We don’t know those [killed in the recent attack], but it hurts us to know their families are suffering the loss of their loved ones,” she added.

Security analysts are hesitant to attribute the incident to any particular organization with contradictory reports attributing the killings to FARC Marxists rebels who refused to lay down their weapons as well as a local paramilitary group known as “Los Puntilleros. They do, however, fear the type of massacres commonly witnessed in the 1990s and 2000s could increasingly re-haunt Colombia’s more remote regions as the state fails to establish its presence in areas previously operated by the FARC.

“The group responsible and the motive is unclear but there is a greater signal here that the vacuums of power left by the FARC and unoccupied by the government have taken on a new shape”, said Sergio Guzman, a political risk consultant in Bogotá. “This is clearly an escalation of conflict in rural areas that will give many heartaches to rural residents.”

Certain regions are now believed worse off post-peace accord and increasingly resemble the security panorama in certain Mexican states.

“Some areas have several organized crime groups confronting each other, in a way that rarely happened when the FARC was the largest national armed group,” commented Adam Isaacson, an expert on regional security at WOLA. “Places like Mapiripán are starting to look like Michoacán or Tamaulipas, Mexico, with several smaller, regional groups competing for illegal wealth.”

On Dec. 19, the Director of the Defensoría del Pueblo, the government agency charged with protecting human rights, informed local media that it had voiced concerns back in August over potential human rights risks in the region, but those calls went unanswered.