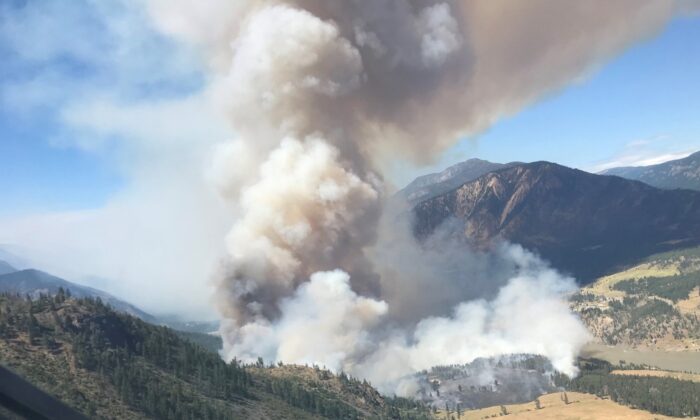 A wildfire blazing just west of Lytton, B.C., as shown in this handout image provided the BC Wildfire Service has now scorched five square kilometres of trees and bush, more than doubling in size in less than 12 hours. (The Canadian Press/HO-BC Wildfire Service)
Canada

Six Homes Destroyed, No Injuries Reported in ‘Daunting’ Wildfire West of Lytton, BC

A wildfire just west of Lytton, B.C., has burned at least half a dozen homes but is spreading in the opposite direction of the village, officials said Friday.

John Haugen, deputy chief of the Lytton First Nation, said conditions are challenging, a day after the blaze broke out nearly two kilometres northwest of Lytton on the other side of the Fraser River.

“It’s been really daunting. Sometimes there’s no power here and we’re running out of water on the east side of the Fraser River,” he said during a briefing.

A tiny ferry that crosses the river is out of service due to high water levels, making it difficult to move resources toward the fire on the west side, he added.

The blaze comes just over a year after a ferocious wildfire scorched the same region, levelling the town centre and displacing many residents who have yet to return home.

It has burned at least 15 square kilometres since it broke out Thursday and is spreading in steep terrain on its western flank, the BC Wildfire Service said. About 80 firefighting personnel are on scene.

The Lytton First Nation and Thompson-Nicola Regional District have issued evacuation orders and alerts for dozens of properties on the west side of the river. Despite some initial communication challenges unrelated to the fire, cell service has been restored and Haugen said he believes all residents are aware of the situation.

At least six residential structures have been lost, although the number could be upward of nine, and officials are trying to contact affected residents, he added.

“It’s devastating, so we have to be mindful of how we approach them and confirm those losses.”

Forests Minister Katrine Conroy said the fire is not currently posing a threat to the village of Lytton. Crews successfully contained flames that jumped the Fraser River Thursday night, she said.

Public Safety Minister Mike Farnworth said that while the fire is still classified as out of control, models suggest it won’t threaten any other communities. There have been no reported injuries, he added.

“I know that this is an extremely stressful and emotional situation as the community is still working toward rebuilding after last year’s devastating Lytton Creek fire. And I know that this has been challenging on BC Wildfire Service crews, many who responded to last year’s incident,” Farnworth said.

BC Wildfire Service spokeswoman Taylor Colman said earlier Friday that the vigorous fire was being fuelled by gusty winds and the high waters, lack of roads and steep terrain made access difficult.

By Friday afternoon, winds blowing at 30 to 40 kilometres an hour were pushing the fire west, away from communities, the wildfire service said.

Three 21-person crews and three initial attack crews were fighting the fire, the service said. They were supported by six helicopters, three airtankers and a lead aircraft known as a bird dog.

Premier John Horgan said on social media that his thoughts are with people in the area.

“It’s unimaginable to face a second wildfire a year after the devastation they faced,” he said on Twitter. “Thank you to the crews working to keep people safe.”

Tricia Thorpe lives in the area and said the fire is renewing memories of last year’s wildfire that destroyed much of Lytton.

“It’s devastating. I feel for the local fire crew,” she said in an interview with The Canadian Press.

“They are a great, caring group of men and women and for them to have to experience this at home, again, has got to be gut-wrenching.”

Thorpe said her heart goes out to those she calls the “westside people,” meaning those living on the west side of the Fraser River, across from Lytton.

“They are the ones who welcomed us into their community last year when we lost everything in the Lytton wildfire,” she said.

Evacuees have been told to travel to emergency reception centres in Lillooet or Cache Creek.

By Amy Smart and Colette Derworiz