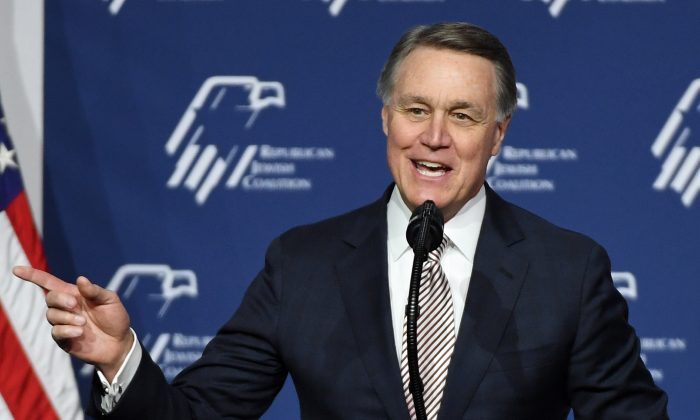 WASHINGTON—Firing underperforming career civil servants should take no more than a year, according to six Republican senators who introduced legislation to make that time limit a reality.

“Government employees should be held to the same standards as private sector employees, yet it is nearly impossible to fire bureaucrats for failing to do their jobs,” said Sen. David Perdue (R-Ga.) in a June 19 statement.

“Right now, it can take more than a year to fire or replace a civil service employee, even for poor performance or misconduct. With a $22 trillion debt crisis, we cannot afford to hold onto bureaucrats who aren’t doing their jobs.”

A companion version of the measure also has been introduced in the House of Representatives by Rep. Barry Loudermilk (R-Ga.).

Their bill would apply throughout the federal career civil service reforms approved by Congress and already implemented by President Donald Trump at the Department of Veterans Affairs (VA).

“Since President Trump took office, more than 4,300 bad actors have been fired, demoted, or suspended at the VA. It’s time to expand those efforts and address problems across the entire federal government,” Perdue said.

The VA personnel changes were approved by the 115th Congress, which included Republican majorities in both the Senate and House of Representatives.

The MERIT proposal, according to its backers, would

“The American people deserve high-performing and effective federal employees,” Grassley said in the June 19 statement. “That’s not always what they get, unfortunately.”

Grassley added that “although most federal employees work hard to do their jobs well, some government employees chronically display poor performance or misconduct, and get away with it, due to the current byzantine process for removing an employee.”

Cotton said that “whether in the private sector or in government work, employees should succeed and fail based on merit.”

“Our bill will introduce a new level of accountability for civil service employees, one that ensures agencies can take appropriate measures against bad actors,” he said.

Although the MERIT proposal has solid prospects for passage in the Republican-led Senate, it’s doubtful the House Democratic majority will allow Loudermilk’s bill to reach the floor for a vote.

Public sector employee unions, including the American Federation of Government Employees (AFGE), the National Treasury Employees Union (NTEU) and the National Federation of Federal Employees (NFFE), adamantly oppose shortening the firing process, and such labor groups contributed more than $16 million to Democrats last year, including many members of the current House majority, according to OpenSecrets.org.

Americans for Limited Government President Richard Manning, for example, said on June 21 in a news release issued by Perdue’s office that “you can’t drain the swamp unless you can fire the swamp. The MERIT Act allows a faster pathway for firing incompetent, lazy, or recalcitrant federal employees and is a necessary first step toward ending the politicization of the federal civil service workforce.”

The National Taxpayers Union (NTU) Director of Policy and Government Affairs Thomas Aiello said in the release that the MERIT bill is needed because “due to the arduous termination process, it is often easier for federal agencies to simply retain workers that would otherwise be let go if they were in the private sector.”

“Holding federal employees to similar standards as those in the private sector would help curb wasteful spending, increase productivity, and boost morale … it can make an immediate difference within the federal bureaucracy,” he said.

Kevin Kosar, vice president of the R Street Institute, said in the release: “Today’s civil service protocols make it very costly and very difficult for an agency to fire an underperforming federal employee. No private company could succeed with such restrictions.”