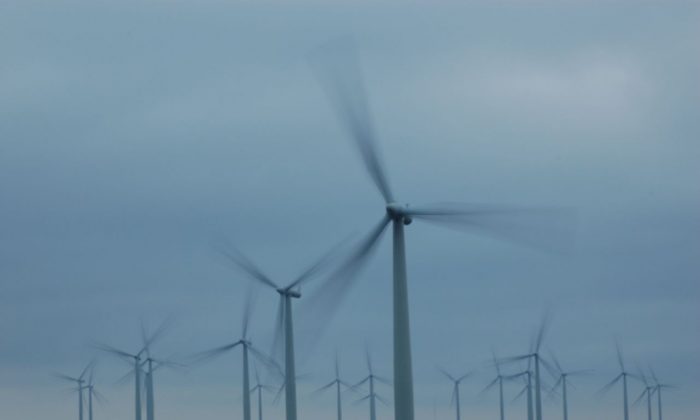 Not only was December 2015 the U.K.’s wettest month on record, but it was also exceptionally stormy. Bad news for many, but great news for the country’s wind power and hydro generators.

In fact, storms Desmond, Eva, and Frank meant that throughout December, more than 19 percent of Great Britain’s (not the U.K.’s—as Northern Ireland is not included in the underlying data) electrical energy came from wind, solar, and hydro combined. That’s the highest ever figure for a calendar month.

British energy is now more diversified than ever. In 2015, for the first time, no individual fuel source provided more than 30% of the electricity generated.

It was an exceptional end to an unusual year that saw several new records set within Britain’s power sector as the transition from dirty to clean energy continued. Here are a few of the most notable outcomes.

Wind, solar, and hydro—the weather-dependent renewables—together generated 14.6 percent of Great Britain’s electrical energy in 2015, the highest ever annual amount. Wind stormed (literally) past the 2014 record to break through the 10 percent milestone. Solar more than doubled to 2.5 percent.

The weather-dependent renewables of wind, solar, and hydro peaked at 22 percent of Britain’s electrical energy generation over the week of Christmas (the grey line in week 52 on the chart above)—another record.

The previous day, June 6, was both sunny and windy, which meant at 2 p.m. solar, wind, and hydro were generating more than 40 percent of British electricity. Coal may also have dropped to a record low at the same point.

Germany’s Big Push for Renewables Is Paying Off

Natural gas generated more than a quarter of Britain’s electricity throughout 2015. It was enough to return gas to top spot, but still far below its 46 percent peak six years ago. Coal continued its decline.

As recently as 1990, Britain still relied on coal to generate more than 70 percent of its electricity. But things have changed a great deal since then as natural gas and more recently renewables have provided more options.

British energy is now more diversified than ever. In fact, averaged over 2015, no individual fuel source provided more than 30 percent of the electricity generated—the first time this has ever happened.

More renewables and less coal means that when the U.K.’s Department of Energy and Climate Change release their greenhouse gas emissions statistics for the power sector this March 2015 will be the lowest value recorded since 1990.

A rough estimate (using this data) puts the emissions somewhere between 105 and 110 million tons of CO2 equivalent. This is at least a 45 percent reduction from the power sector since 1990—the country is making significant progress towards decarbonization.

Where next? It’s very possible that 2016 will see coal generation drop below nuclear for the very first time since Britain’s (and the world’s) first nuclear plant came online 60 years ago.

The underlying data of the differing fuel types and imports/exports is available from Elexon and National Grid websites for each half hourly period of the year. This analysis adds these values together to provide a total for each period. The percentages presented here are then calculated using this total, and it is likely that these can slightly differ from other analyses (including that of DECC) due to a different methodology or by using different estimates of embedded wind or solar generation.

Grant Wilson, Ph.D., is a research associate in the Environmental and Energy Engineering Research Group at the department of chemical and biological engineering at the University of Sheffield in the U.K. This article was originally published on The Conversation.