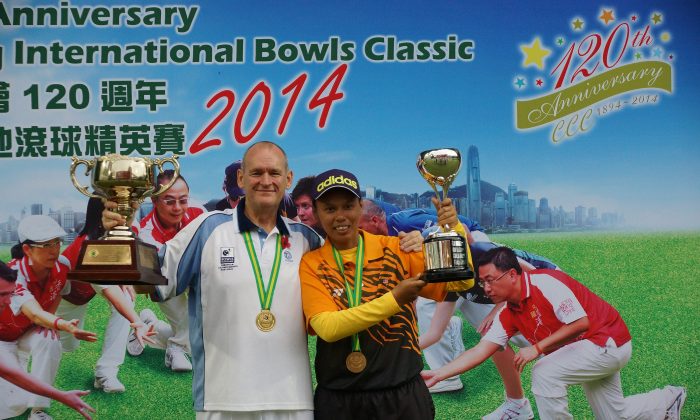 Two times Commonwealth Games Singles champion Siti Zalina Ahmad completed her collection of Classic trophies by winning the Singles title on Sunday, Nov 9, after beating Sonia Bruce from the Philippines. She won the Pairs title back in 2008 when the first women’s competition was held at the Classic.

Despite the downpour on early Saturday morning, the women’s competition went ahead at CCC’s outdoor green after a delay and the bowlers needed to play under continual drizzle during most of the day. As a result, the last game for the women finished at 11:20 in the evening.

Under the ever-changing weather and green conditions, a number of surprise results were registered in the first round. The defending champion Lorraine Malloy from Scotland was knocked out by Dreamy Ng from Seabird Sports Club and three-time Pairs champion Kelsey Cottrell of Australia was eliminated by novice bowler Candy Au from Kowloon Cricket Club.

Siti defeated a number of strong bowlers enroute to the final, including Anne Dunwoodie from Scotland, Emmie Wong from Hong Kong Football Club and Yu Xiao Yan from China.

The final against Bruce was a tight game when both players showed their aggressive way of bowling. The game was tied at 4:4 after six ends, then Bruce took the next two ends to lead by 6:4. In the last end when Siti was holding two, Bruce was unsuccessful in taking out the shots and Siti drew the last bowl to win the set.

Bruce came back strongly in the second, leading 9:3 in the 7th end. But she suddenly lost her touch in the 8th end and lost four shots. In the last end both sides displayed delicate drawing and the final result needed to be decided by a close measure by the umpire. Siti took two shots to tie the end and won the game.

“The last two ends in the second set were a bit lucky for me,” said a happy Siti, “If I didn’t get four in the second last end, maybe I cannot win this game because anything can happen in the tie-break.”

“My game in the final was not really consistent but I am still happy to win the game. After four years and come back to get this result made me very happy,” she said.

Siti was a runner-up at the Classic Singles in 2010, when she lost to compatriot Nor Hashimah Ismail in the final. She is the number one player in Malaysia, winning the Singles at the Commonwealth Games in Manchester (2002) and Melbourne (2006).