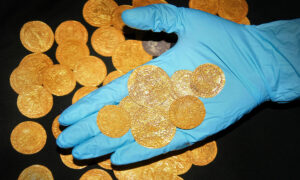 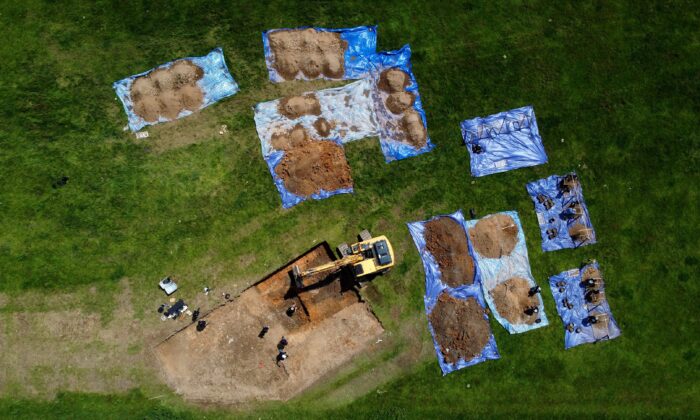 Archaeologists and American Defense POW/MIA Accounting Agency staff work to recover the remains of an American bomber crew, whose aircraft crashed at a site in Arundel in 1944, in Sussex, UK, on June 28, 2021. (Gareth Fuller/PA)
UK

A team of American veterans are digging up a field in Sussex, United Kingdom, where a bomber plane crashed during the Second World War in an effort to finally bring their fallen compatriots home.

In June 1944—two weeks after Allied troops landed in France on D-Day—a B-24 Liberator was in a group conducting a bombing raid near Paris when it took severe damage from anti-aircraft fire.

Despite its condition, the pilots and crew managed to nurse the aircraft back to the English coast, but for reasons unknown it crashed in a farmer’s field near Arundel, West Sussex.

Seven of the airmen aboard managed to bail out of the stricken plane but three are believed to have been killed after trying to make an emergency landing.

Now 77 years later, U.S. veterans with the American Veterans Archaeological Recovery (AVAR) have teamed up with the University of York in an effort to recover any human remains from the crash site so that they can be repatriated to America.

Project leader Stephen Humphreys, CEO of AVAR, said he hopes the mission will bring closure to any surviving family members back home as well as provide an opportunity for veterans on his team to build archaeology skills.

Speaking to the PA news agency, the former U.S. Air Force captain said: “We can’t divulge a lot of specific information about the aircraft but I can tell you that the aircraft did crash in 1944 in a farmer’s field.

“That farmer took a deep interest in both the crash and in the story of those airmen and was a big part of preserving this site within the local community for the last 77 years so that this site would be here for us to come in and do this recovery mission in 2021.

“So our mission is to actually recover the remains of those service members who were lost when this aircraft crashed in 1944, have them identified … and hopefully give closure to some families if we can.”

The bomber that crashed near Arundel was part of the 489th Bomb Group, which flew B-24 Liberators out of RAF Halesworth, Suffolk, for several months in 1944.

The group flew tactical missions in support of ground forces in northern France, including saturation bombing before the final Allied breakthrough at Saint Lo in July 1944.

The site in West Sussex where the Liberator is believed to have crashed sits on green farmland less than a mile from Arundel Castle.

The dramatic event was witnessed by a young boy who lived at the farm, and who would go on to ensure that the site was preserved over the subsequent decades.

A memorial to the airmen sits at the edge of the field—a small memento to the lives lost marked with two star-spangled banners.

The four-week excavation at the site involves a digger removing piles of soil from a wide trench and carefully depositing it on tarpaulins ready for examination.

The team then sets about painstakingly sifting through the earth in search of anything from the crash.

Humphreys added: “So obviously this is a fairly traumatic crash site but still there will be human material and human remains that survive so that is what we are attempting to recover.

“And personal effects, a number of items that would have been carried by those airmen at the time, those can help us to pinpoint where in the wreckage we might be able to find those remains.

“It’s all about making the details of the excavation as precise as we possibly can so that we can be as precise as we need to be in terms of being able to say where those individual finds came from out of the ground while we’re looking for those airmen.”

The dig is being run as part of Operation Keeping Faith, a partnership between the the U.S. government’s Defense POW/MIA Accounting Agency (DPAA) and American Veterans Archaeological Recovery, a company giving veterans the chance to work on archaeological sites to gain experience and boost mental wellbeing.

Humphreys said: “On my team we have the full range of individuals from people who are veterans and who want to go out and do something cool and learn a new skillset, but we also have veterans who already have degrees in archaeology and who do this as a career and of course this is great training for them in the pursuit of that career.”