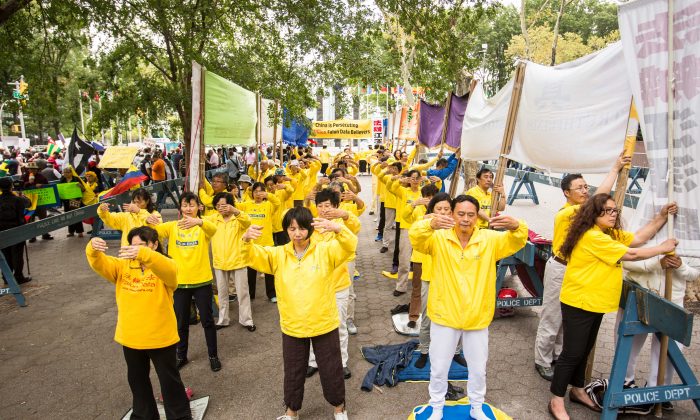 Falun Gong exercise at the Dag Hammarskjold Plaza near the United Nations headquarters in New York on Sept. 19, 2017, to raise awareness about the persecution inside China that is now in its 18th year. (Benjamin Chasteen/The Epoch Times)
NY News

Outside UN Headquarters, a Plea for Freedom of Belief

Silenced and persecuted in China, practitioners of the spiritual practice Falun Gong tell their harrowing stories
By Annie Wu

NEW YORK—They had just arrived in the United States a little more than a week before, but they were ready to tell the world about what they had endured.

Ahead of the U.N. General Assembly in New York City, two sisters from China joined a group of about 80 meditating protesters outside U.N. headquarters. Rui and Xing are practitioners of Falun Dafa, a spiritual practice that the Chinese regime has heavily persecuted since 1999. They asked to use pseudonyms for fear of repercussions for their parents still living in China, who also practice Falun Dafa (also known as Falun Gong).

Rui and Xing were just 11 and 8 when their father was arrested and sentenced to prison for 14 1/2 years for his faith in the ancient Buddhist discipline. Feeling threatened by Falun Dafa’s growing popularity in China—the practice had reached 100 million practitioners at its peak, according to Falun Gong sources, or 70 million according to a survey by the state—Communist Party authorities launched a systematic campaign in 1999 to eradicate the practice.

Rui and Xing recall the local police barging into their home in Gansu, a central region of China, and keeping them under surveillance 24 hours a day, for weeks on end. Six years later, their mother was also arrested and sentenced to prison. This time, the police enlisted Rui’s school administrators and teachers to spy on her. At ages 17 and 14, the sisters were left to fend for themselves, with the help of some Falun Dafa practitioners who lived nearby. Rui and Xing were told they could not apply for college student loans.

“We want to tell China’s delegates to stop the persecution, so that the practitioners in China can believe freely. They are people we know, people who are still suffering,” Rui said in Chinese.

Despite the heavy winds on Tuesday, the Falun Dafa practitioners arrived early in the morning to begin their silent demonstration outside the U.N. Most were either performing the practice’s gentle exercises or holding tightly to banners, which often threatened to collapse against the wind, with printed messages in English and Chinese like “The world needs truth, compassion, tolerance”—the faith’s three central tenets—and “Bring Jiang Zemin to justice.” Jiang is the former leader of the Chinese Communist Party who initiated the persecution.

Wang Luorui, a practitioner who has been arrested 11 times in China, said she hopes President Donald Trump will put pressure on China to bring Jiang to justice. “It will allow Falun Gong to bring the universal values of truthfulness, compassion, and tolerance to the Chinese people,” she said.

Wang Cun Ling, a practitioner from Shanghai, said her faith helped her to become a responsible and caring teacher who mentored many students in China, helping them to successfully apply to top colleges. Through demonstrating outside the U.N., she hopes to convey the message to people around the world that Falun Dafa is good. “We want to tell people the truth [about Falun Gong] in a peaceful, compassionate way,” she said.