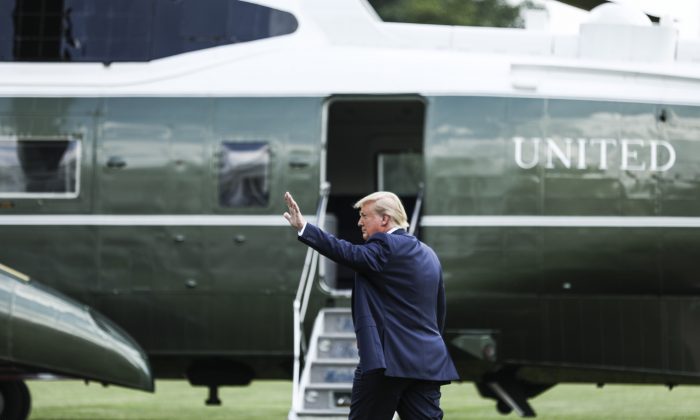 President Donald Trump speaks to the media before boarding Marine One en route to Ohio on the White House South Lawn in Washington on Aug. 1, 2019. (Charlotte Cuthbertson/The Epoch Times)
By Janita Kan

The sister of a couple who was fatally shot in El Paso, Texas, over the weekend has called Democratic politicians “pure evil” for politicizing the shooting and casting blame on President Donald Trump.

Vibora (Deborah) Anchondo’s heartfelt message posted on Facebook on Aug. 6, garnered extensive attention as she expressed her frustration over the politicians. Anchondo made the post ahead of Trump’s Aug. 7 visit to Dayton, Ohio, and El Paso, Texas, to meet with first responders and victims of the two massacres.

“It’s such a shame that two of our local politicians (I refuse to say their names as they don’t deserve it) are saying that our President is not welcome on Wednesday,” Anchondo wrote without identifying the politicians.

“I cannot believe how these monsters are using the tragic event to push their political agenda,” she added.

Anchondo’s brother, Andre Anchondo, and sister-in-law, Jordan Anchondo, lost their lives during the Aug. 3 shooting at the El Paso Walmart. Anchondo said she and her family are “living a horrible nightmare” and said the president’s visit “will be more than comforting to my family.”

“He will not be here for a political agenda,” she said. “The two monsters from El Paso, who do not deserve to be mentioned by name nor even the nicknames I have for them, are just pure evil.”

She continued: “My brothers [sic] body was still laying at Walmart on Saturday night when they decided to make this into a political issue and push their agenda by blaming our President for this. Rather than focusing on the situation and the individual who destroyed the lives of many, these evil people selfishly turned this into a political war.”

“I’m equally as angered by those two as I am with the person who took my brother and his wife from me, typing this I think I feel more animosity towards those two evil politicians,” she added.

Rep. Veronica Escobar (D-Texas) said during an appearance on MSNBC’s Morning Joe on Aug. 5 that it was “probably unfair” to connect a rally Trump held in El Paso to the shooting. She also claimed that the president needs to “do a little self-reflection” on how he acts at the rallies he holds.

Brave Mom ‘Gave Her Life’ to Save Baby in El Paso Shooting, Shielding Him From Gunfire

She then said that the president is not welcome in the city.

“It is shocking to me that [Trump] is so utterly self-aware,” Escobar told hosts Joe Scarborough and Mika Brzezinski. “And this is why, from my perspective, he is not welcome here. He should not come here while we are in mourning.”

“I would encourage the president’s staff members to have him do a little self-reflection. I would encourage them to show him his own words and his actions at the rallies because we’re not going to get past this until there’s acknowledgment from the very top that we need to heal, that this whole country is hurting, that there has been bigotry and racism and hatred that has been stoked at all levels,” she added.

“And as the president, he has the most significant authority and responsibility to show this country, to lead this country into healing. And now is the time, and he needs to accept responsibility, everyone does, for what has gotten us to this point.”

Similarly, presidential hopeful Beto O’Rourke, who was a former Texas congressman, told reporters after the El Paso shooting that Trump “is a racist and he stokes racism in this country.”

On Aug. 5, O’Rourke told the El Paso Times that Trump “has no place here.” The president “should not be in El Paso,” O’Rourke added.

“He’s helped to create what we saw in El Paso on Saturday,” the 2020 Democratic presidential candidate claimed. “He’s helped to produce the suffering that we are experiencing right now. This community needs to heal.”

Along with Anchondo, White House counselor Kellyanne Conway criticized several Democratic presidential candidates in a Fox & Friends appearance on Aug. 6, saying that instead of proposing viable solutions to the issues, they are instead politicizing it and using it to blame Trump.

Conway took the opportunity during the program to call out O’Rourke for his rhetoric, saying that it was not helpful.

On Aug. 7, the president told reporters that he “concerned about the rise of any group of hate” prior to leaving for his scheduled visits in the two cities.

He also defended his rhetoric after opponents pinned the blame for the massacres on the president’s rhetoric and on gun laws they say are not restrictive enough.

“I think my rhetoric brings people together,” Trump said. “Our country is doing incredibly well.”