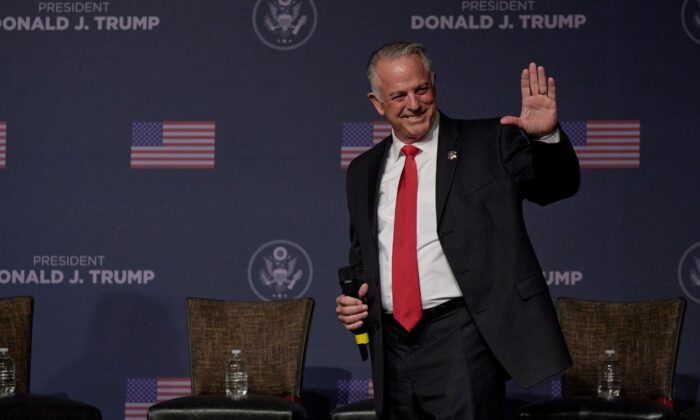 Democrat candidates in November races nationwide are seizing on perceived post-Roe repeal momentum to pound away at Republican opponents they say will, whether they admit it or not, ban abortion.

Lombardo, the two-term sheriff of Clark County who, with an endorsement from former President Donald Trump, won May’s 10-candidate GOP primary, has not emphasized abortion on his platform nor while stumping.

Lombardo’s campaign has mostly hammered away on “kitchen-table issues” such as the cost of gas and groceries, “ways to fix the state,” education, and crime.

Just before Labor Day weekend, however, with the final sprint to Election Day set to begin, the Lombardo campaign introduced a new issue it will pursue in the coming weeks: Scandal.

RGA Nevada PAC, an affiliate of the Republican Governors Association (RGA), in an Aug. 31 $2.5 million ad claims Sisolak fast-tracked permits and applications for “a shady COVID testing company that got 96 percent of their test results wrong” on behalf of a campaign donor.

The ad, called ‘Cronyism,’ says it is a “tale of corruption and cronyism that cost lives.”

The claims are based on a May ProPublica investigation into how Chicago-based Northshore Labs rapidly expanded into Nevada in 2020 without the usual licensing process after hiring Greg and Angelo Palivos to “build clientele and manage operations.”

Peter Palivos, their father, has contributed nearly $50,000 to Sisolak campaigns since 2011, including $38,000 for his 2018 gubernatorial campaign, according to ProPublica.

The matter may have gone unnoticed had Northshore’s tests worked, but 96 percent of those used at the University of Nevada at Reno (UNR) and elsewhere did not. The state canceled its contract in March.

Sisolak denies speaking with the Palivoses about Northshore and notes his office is cooperating with a U.S. Inspector General’s probe into the company.

In a statement in response to the ProPublica story, Sisolak’s office said Northshore’s “negligence is despicable,” noting it opened an investigation, had suspended the company’s operations, and was complying with a federal subpoena for documents.

Northshore “took advantage of states and local municipalities at a time when millions of Americans were relying on their services,” Sisolak’s office said. “In order to hold Northshore accountable for these fraudulent practices, the state of Nevada is assessing its legal options.”

On Aug. 30, Lombardo sent a request to the state legislature’s Interim Finance Committee—a joint Senate/House panel that can make contingency budget decisions between sessions—to assess how much the investigations and lawsuits related to Northshore’s failed tests could cost Nevada taxpayers.

“Individuals from the Governor’s Office fast-tracked the inspection and licensure of Northshore Clinical Laboratories without a proper vetting process. Now, due to the unethical actions of Nevada’s Executive Branch, it is unknown how many illnesses and deaths have been caused by the state’s egregious actions,” Lombardo said in the letter.

Republicans are hoping the taint of scandal related to an alleged COVID scam could nudge some undecided voters in what forecasters say will be a nip-and-tuck race.

Of the 36 gubernatorial elections on 2022 ballots nationwide, the Sisolak-Lombardo race is among 13 identified as ‘Battlefield’ elections by Ballotpedia. Sisolak is among nine incumbent Democratic governors whose re-elections are in doubt, according to the nonpartisan research site.

Cook Political Report and Sabato’s Crystal Ball rate the Nevada governor’s election as a “toss up,” while Inside Elections gives Sisolak a slight advantage with a “Tilt Democratic” rating.

Polling of likely voters appears to confirm projections of a tight race with surveys conducted over the last six weeks showing neither candidate ahead by more than 2–3 percentage points, including an Aug 16–24 survey of 500 likely voters by Fabrizio, Lee & Associates/Impact Research where Lombardo garnered 48 percent to Sisolak’s 46 percent.

Both parties, whether in direct or PAC contributions, are investing heavily in the race. According to the Nevada Secretary of State’s Office, Sisolak’s campaign reported in July that it had raised $1.58 million between April 15 and July 15 and $3 million for the year. It identified $10.78 million in funds available with the next report due Oct. 15.

The two campaigns have been wheeling about, lobbing broadsides against each other in statements, Twitter posts and advertising since May’s primaries, but the candidates will go toe-to-toe during a 90-minute Oct. 2 town hall debate in Las Vegas hosted by the Nevada Independent as part of its third annual ‘IndyFest’ policy and politics forum.

Sisolak, who spent a decade on the Clark County Commission before succeeding term-limited Republican Gov. Brian Sandoval by defeating the GOP’s Adam Laxalt in 2018, said he’ll try in the debate to get Lombardo to clarify conflicting statements he’s made regarding abortion since the U.S. Supreme Court in late June repealed Roe v Wade, sending regulation of the procedure back to the states.

In response to the ruling, Sisolak issued an executive order protecting abortion access for out-of-state residents and forbidding state agencies from gathering information on behalf of agencies from other states. If re-elected, he wants to encode the order into state statute with legislation.

Lombardo has strayed clear of abortion unless directly queried, usually saying abortion policy is “settled law” in the state that can only be changed by voters in a ballot measure.

But New Day Nevada, a Democrat PAC, has launched social media ad campaigns that show Lombardo promising to consider “new restrictions on our reproductive rights—including taking away birth control” when he told a Reno television station he would “absolutely” look into repealing Sisolak’s executive order and told the Las Vegas Review-Journal that he would consider banning abortions after 13 weeks, nine weeks sooner than the state’s 22-week threshold.

In emailed statements to the Associated Press and other Nevada media, Lombardo’s campaign has said repeatedly that if elected, he has no plans to limit access to contraceptives or restrict access to abortion as permitted under state law, with Lombardo himself clarifying he would “have to evaluate (the order) and I’d look at it from the lens of being a pro-life governor.”

Lombardo expects he’ll be asked to again expound on his abortion stance during the debate. He also expects to ask some questions of his own.

“I look forward to finally getting answers from Steve Sisolak about his COVID testing scandal. He’s under a serious federal investigation, yet he’s been completely silent about Northshore to date. Nevadans deserve answers,” Lombardo said in a Twitter post.