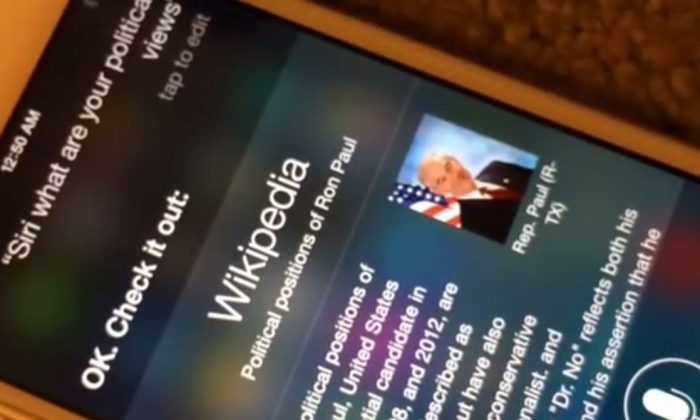 Some versions of Siri, the iPhone voice system, apparently respond to political inquiries by displaying the Ron Paul WikiPedia page.

On Twitter, users as well as the website BuzzFeed, posted Siri’s “Ron Paul” responses when they were asked.

According to BuzzFeed, the Libertarian sub-Reddit discovered it recently.

An iPhone user who said he reset his iPhone asked Siri what it’s political views were and uploaded the result to his YouTube channel, Ron Paul Flix. The device then showed Paul’s Wikipedia page after one attempt at the question.

“Somebody at Apple loves Ron Paul … I hope they have a job tomorrow,” the YouTube user–who appears to be a Ron Paul supporter–said in the video.

Another YouTube user also posted Siri’s reaction on  YouTube, which also then displayed Ron Paul’s WikiPedia page. “Why? I have no idea,” the user says in the video.

“The only logic that I can come up with is that Ron Paul is one of the most Google’d names” in U.S. politics, he said.

It should be noted that both YouTube users appear to be supporters of Paul, a former Republican member of Congress who ran for president several times.

On the Libertarian sub-Reddit, one user asked: “I wonder if the result is because of your search history/what you look at on your phone most…” and another Redditor replied: “As it turns out, it’s not. Try it out on a random friend’s phone if you don’t believe me.” Several other users also confirmed the results.

However, when several Epoch Times reporters asked Siri’s political views, it said, “May the best candidate win” and gave other, non-Ron Paul-related responses.