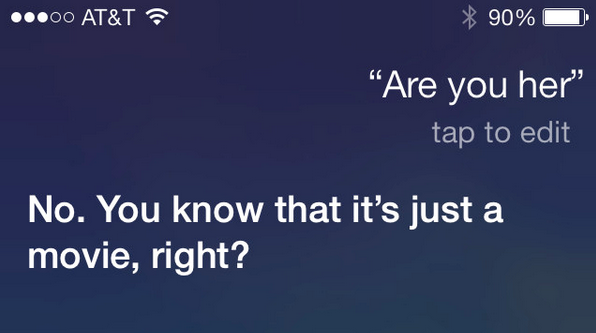 Siri says that it’s not “her,” referring to the Scarlett Johansson-voiced smart phone operating system in the new movie “Her.”

When iPhone users ask Siri questions about whether it is “her,” Siri responds that it’s not.

Here are some responses that have been recorded:

-No. In my opinion, she gives artificial intelligence a bad name.

-No. I don’t spend much time with purely fictional characters.

-No. Her portrayal of an intelligent agent is beyond artificial.

-No. You know that’s just a movie, right?

Meanwhile, Susan Bennett, the real woman behind the voice of Siri, said during an interview with Showbiz Tonight that she’s never surprised when Siri is sassy “because that’s part of her character.”

Bennett is a middle-aged voiceover actor who is based in Atlanta, reported Parade.

“She told me she has always been a little bit jealous of Scarlett Johansson, so there you go!” Bennett quipped.

Elaborating, Bennett said that she doesn’t believe that Apple programmers are intentionally having Siri say bad things about the movie.