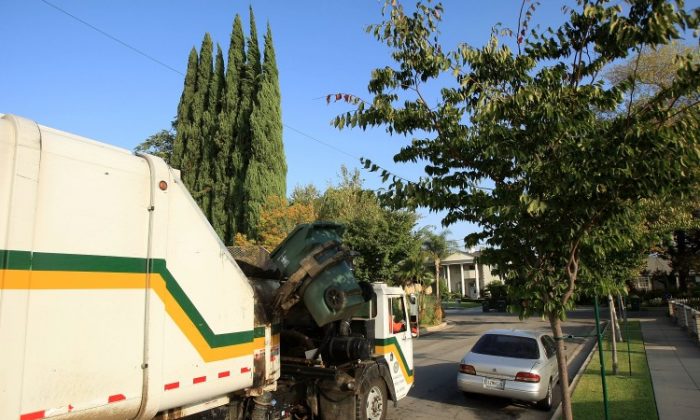 Pasadena Public Works trash trucks collect garbage and yard waste in Pasadena, Calif., in this file photo. States like California are deep in debt over things such as pension payments, and have created a large tax burden. (David McNew/Getty Images)
Business

Many U.S. state and municipal treasuries are either running low or are out of funds, given that 12.7 million people are still unemployed and thus don’t pay state income taxes.

Additionally, with a large housing inventory still sitting idle in the market, state treasuries no longer receive the real estate taxes they could count on in the past.

The exact number of houses, including condominiums, town houses, and apartment houses, that have been foreclosed and no longer bring in real estate taxes is not known; however, a 2010 estimate suggested that 7 million homes, called the shadow inventory, were on the market at that time.

The most disconcerting issue to be faced by future taxpayers is that state employee compensation packages, which include all kinds of pension benefits earned by an employee working for the state, accrue daily, but are not recorded.

“Current accounting rules have allowed states to ignore the total amount of the liabilities. … The effect is to create the illusion—for individuals and states—that they can continue to spend,” without having to worry about the true outstanding debt balance, according to a second study by the Institute for Truth in Accounting (IFTA) titled “The Financial State of the States,” released in mid-June.

According to the IFTA, “46 states have dug financial holes for current and future taxpayers,” creating a large tax burden.

Using 2010 information, the IFTA study indicates that states have accumulated close to $1.2 trillion in liabilities, despite that 49 of the 50 U.S. states require a balanced budget, which would have eliminated future taxpayer burden.

A more recent estimate of public debt issued by Moody’s Corp. suggests that U.S. public pension debt has risen from $766 million to $2.2 trillion. According to the Calpensions website, Moody’s estimate is based on “a lower forecast of pension fund investment earnings.”

Fiscal year 2010 information was used in the IFTA report for comparison reasons because researchers require the same fiscal year for all participants in a study. States generally don’t release annual reports immediately after the year ends. For example, Hawaii state accountants took 469 days before they released their annual report. Illinois took 365 days, while Connecticut took 212 days.

Taxpayers’ Future Burden on the Table

“What now exists is a ‘taxpayer’s burden’ representing the amount each taxpayer would have to send to their state’s treasury to fill in their state’s financial hole,” according to the IFTA study.

Taxpayer burdens come to life when, for example, the state omits future employee retirement payments from its annual report. As it is done in a Ponzi scheme, the state transfers the payment to the future, that is, it will be paid by future taxes from future taxpayers when the payment comes due.

“Even applying the unrealistic assumptions used by states to calculate their unfunded retirement liabilities, IFTA researchers found the states have accumulated pension and OPEB [other post- employment benefits] liabilities totaling more than $1 trillion,” according to the IFTA study.

The total debt recorded on the balance sheet amounted to $111 billion, leaving a total of $909 billion unaccounted for in the annual statements.

“This lack of transparency is due to the reporting requirements established by the Governmental Accounting Standards Board (GASB),” the IFTA study states.

Since 1997, the GASB has recommended that states report a portion of the unfunded pension liabilities, but gave the states and municipalities a long time frame to become more transparent.

States have until after 2052 before all liabilities are to be reported in financial statements. Furthermore, although states must report the required amount in the income statement, it does not have to identify clearly if any of the amount is unfunded at that point in time. The IFTA researchers discovered that $422.7 billion in associated pension benefits were not reported in 2010 balance sheets.