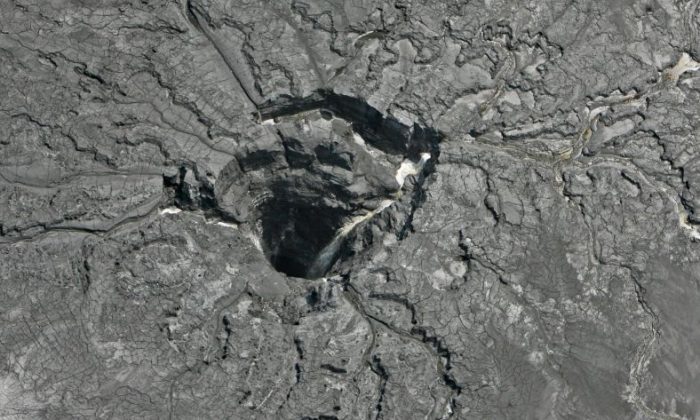 This aerial photo shows a massive sinkhole Friday, Sept. 16, 2016, in Mulberry, Fla., that opened up underneath a gypsum stack at a Mosaic phosphate fertilizer plant. Tens of millions of gallons of reprocessed water from the fertilizer plant in central Florida are likely to have seeped into the Floridan aquifer after the massive sinkhole opened up. Mosaic says it's monitoring groundwater and has found no offsite impact. (Jim Damaske/Tampa Bay Times via AP)
US

A large sinkhole in Florida that opened recently is leaking radioactive waste into the aquifer that people use for drinking water.

The sinkhole appeared at the Mosaic phosphate fertilizer plant on Aug. 27, but the firm only reported it several days ago. The plant is located about 30 miles from Tampa.

In all, 215 million gallons of water containing sulphate, sodium, and gypsum—the latter containing low levels of radiation—leaked into the aquifer, the Tampa Bay Times reported.

The aquifer is the main source of drinking water in Florida.

The 45-foot-wide sinkhole open up under a “gypsum stack” of waste material used to create fertilizer from phosphate.

The Florida Department of Environmental Protection told the Palm Beach Post that the company “immediately took steps to investigate and initiate corrective action.”

Mosaic says it’s monitoring groundwater and has found no offsite impacts. It is offering free testing of the drinking water to the community, AP reported.

A Mosaic company spokeswoman, Callie Neslund, told The Ledger that the firm will spend between $20 million and $50 million to plug the sinkhole along with other recovery efforts.

“Well sampling is ongoing,” Neslund said. “We are continuing to field those calls.”

A federal lawsuit was filed late Thursday by three central Florida residents who live near the fertilizer plant, AP reported. The proposed class-action lawsuit filed Thursday seeks to recover damages, including for the residents’ possible losses of private wells, and for water testing, monitoring, and treatment.

Some nearby residents are upset that it took so long for the company and local officials to discuss it. Mosaic acknowledged the information gap on Sept. 20.