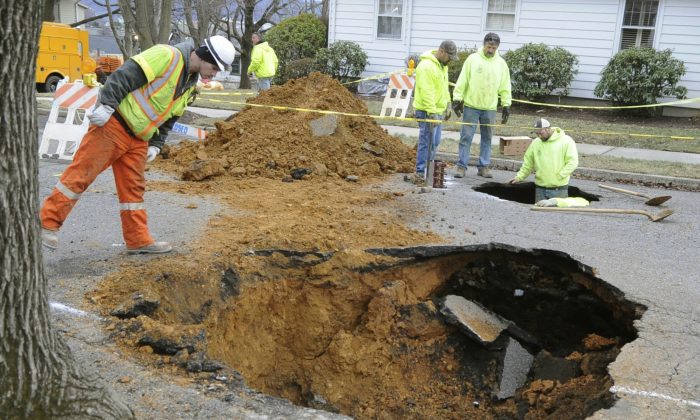 A workers inspects a sinkhole that collapsed part of a street in Bethlehem, Pa., on Dec. 28, 2016. (Sue Beyer/The Express-Times via AP)
Crime and Incidents

BETHLEHEM, Pa.—A sinkhole has collapsed part of a Pennsylvania city street and a gas leak believed to be caused by a ruptured main forced the evacuation of several homes.

The Bethlehem Fire Department says about 30 residents had to leave their homes early Wednesday. A four-block area has been closed to traffic.

Bethlehem is about 70 miles north of Philadelphia.

Fire Chief Robert Novatnack says firefighters were called to the scene around 3:20 a.m. and detected a strong odor of natural gas, including inside some homes. The gas was shut off after several hours and utility crews were making repairs.

Several evacuated residents are sheltering at a nearby school.

A UGI utility company worker was injured when he fell into the hole. He drove himself to the hospital as a precaution.