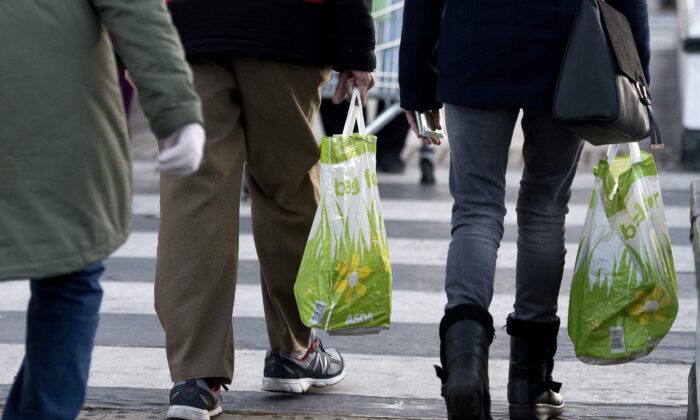 On Jan. 1, the City of Vancouver introduced a ban on plastic shopping bags, along with new mandates for businesses to charge consumers an extra 25 cents on disposable cups, 15 cents for paper bags, and $1 for reusable bags.

The new city bylaws come less than a month after the Trudeau government published draft regulations outlining how Canada will ban similar plastic items at the national level, along with plastic cutlery, stir sticks, straws, and six-pack rings by as early as the end of this year.

Zach Berman, co-founder of Vancouver-based juice company The Juice Truck, says he believes these policies haven’t been thought out practically and won’t reduce Canada’s carbon footprint nearly as much as politicians tout. His concerns are backed by experts and studies that point out how forcing people to use alternatives to plastic bags, in particular, may lead to overall undesirable results for the environment.

“Just like with many of these policies, the city is putting forth an agenda that falls into a cycle of greenwashing,” Berman told The Epoch Times. “And I think with this new by-law, the city kind of set us [businesses] up to fail.”

Berman says he’s concerned that while the city now mandates businesses to collect the new fees on single-use items, it only encourages operators to reinvest the funds into sustainable programs without providing specific guidance. This is leading customers to see the fees only as “a cheeky extra profit,” he says.

For city officials, the goal is to prevent the 82 million cups, 89 million plastic shopping bags, and millions of other single-use items used each year from entering landfills and waterways, which harms various species and marine life.

The Ministry of Environment and Climate Change said in December that it will soon publish draft guidelines for businesses to prepare for federal regulations aimed at reducing single-use plastic items, including the estimated 15 billion plastic bags Canadians use each year, from polluting the environment.

But Frank Stephenson, an economics professor at Berry College in Georgia, says policymakers forget to mention that alternatives to the thin plastic bags used in stores are typically even more carbon-intensive.

“And the idea that carryout plastic bags are single-use is a bit of misnomer because many plastic bags get a second use such as trash can or cat litter liner,” he said in an email.

According to the City of Vancouver, 63 percent of plastic shopping bags were reused as garbage bags by local residents.

Both Stephenson and the City of Vancouver pointed to a study conducted by Rebecca Taylor, an assistant professor at the University of Sydney School of Economics in Australia, that looked into the ban on plastic grocery bags in California.

While her research showed that California’s ban reduced plastic carryout bag usage by 18.1 million kilograms per year, it also led to a 5.4-million-kilogram annual increase in sales of various sizes of trash bags, which are thicker than plastic grocery bags.

For the City of Vancouver, the net reduction of 12.7 million kilograms of plastic bags per year in California shows that the bans are overall effective even if more garbage bags are purchased.

However, Taylor’s research also showed that California saw an increase in the use of paper bags after its ban. An additional 652 million paper bags were used each year, weighing 37.5 million kilograms—more than double the weight of the banned plastic bags.

Producing paper bags includes the environmental impact from deforestation and land use. Pulp and paper mills also produce pollution, and since paper bags are thicker than disposable plastic bags, they require more energy to manufacture and transport.

As for reusable cloth bags, Stephenson says they’re even more carbon-intensive to manufacture than either plastic or paper bags.

According to a study conducted by the British government, a shopper needs to reuse a cotton carryout bag 131 times before it reduces the carbon footprint of a single plastic carryout bag. And that doesn’t factor in if a plastic bag is used more than once, or the energy required to regularly wash the reusable cloth bag.

“If bags are not regularly washed then bag bans can lead an increase in foodborne illnesses from groceries like leaky chicken packages,” Stephenson said, pointing to data collected in San Francisco that found an increase in emergency room visits associated with food-borne bacteria following the city’s bag ban.

He says his juice company and a number of local eateries are upset that the city won’t exempt their biodegradable plastic beverage cups from the 25 cent charge.

However, the City of Vancouver said that the 25 cent charge on biodegradable cups and other single-use items is justified because they aren’t approved for composting under B.C. provincial regulations. Biodegradable items are most likely disposed of in trash bins and end up in landfills or incinerators, the spokesperson added.

The B.C. government is currently reviewing whether to approve biodegradable plastics in the province’s compost facilities.

While Berman says the city’s new bylaws may have some positive impacts, he wants to see Vancouver and B.C. continue to work on expanding and creating new recycling and green programs to encourage businesses to switch to biodegradable plastic products.

“If consumers and businesses are more aware of packaging and waste, I think that there are some positives,” he said. “But I’ve always been of the mindset that if you’re going to do something, do it right.”