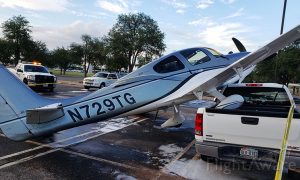 Stock Photo of an ambulance en route to save a life. ((Michael Gil/CC-BY-2.0)
US News

Single-Engine Plane Crashes at California Airport With Nobody Inside

A single-engine plane crashed at Modesto Airport in Northern California, officials announced on Jan. 30, adding that at the time of the crash—there was no one onboard.

Police cited by CBS Sacramento said that prior to the accident, the owner of the Beech V35B Bonanza aircraft was servicing the plane, but was unsuccessful in trying to get it to start. However, after the owner walked away from the plane, the engine suddenly fired up, and the plane began moving down the runway—all by itself.

The pilots told police the plane took off at speeds around 40 miles per hour. The plane was moving toward the busy Mitchell Road after it clipped a parked car.

Witnesses said the unmanned plane hit speeds of around 40 miles per hour, before clipping a parked car and finally crashing into a chain-link fence.

Modesto Police Department Sgt. Mark Phillips told KOVR-TV that after the plane hit the vehicle, it changed direction away from a nearby hangar, where there were people inside. He said the fence also kept the plane from making its way onto a busy road.

“If it was to get over that [grass] and get onto [the road], we would really have had a problem on our hands trying to stop that plane with nobody inside it,” Phillips said.

No one was injured in the crash, but two buildings were damaged.

A pair of pilots working on a plane propeller at #Modesto Airport tell police it suddenly took off at around 40mph; clipping a parked car before heading towards Mitchell Rd. Luckily this fence stopped it from going into traffic. I'll have a live report on @CBSSacramento at 4pm. pic.twitter.com/b5aB5VHaJ3

Officials from the FAA were at the scene of the crash on Wednesday afternoon conducting an investigation.

It is not known why the plane suddenly took off. Before the plane began to move of its own accord, mechanics had been working on the aircraft’s electrical system, according to a tweet posted by local reporter Linda Mumma.

A crane has arrived on scene at the #Modesto Airport to lift the crashed Beechcraft Bonanza out from on top of a fence. @ModestoPolice say no one was inside the aircraft when it suddenly took off while mechanics were working on the electrical system. Details on @CBSSacramento @ 5 pic.twitter.com/tvebX6Y3Zp

Mumma also noted in the tweet that a crane was used to take away the severely damaged Beechcraft Bonanza V35B.

According to the Aircraft Owners and Pilots Association (AOPA), the “V” series Beechcraft Bonanza is a smaller, more affordable version of the six-seater Bonanza A36s. The AOPA calls the V-tailed Bonanza, which is the same model as the one that crashed at Modesto Airport, a “budget buy” that “doesn’t sacrifice any of the Bonanza mystique.”

The AOPA does note, however, that the V35B suffered from a questionable reputation due to structural issues that prompted the FAA to issue an airworthiness directive, calling for structural enhancements.

“Many have heard of the V-tails’ reputation as an unsafe airplane prone to structural failure,” writes the AOPA’s Ian Twombly.

“Early problems with structural failure prompted the FAA to issue an airworthiness directive decades ago that beefed up the tail spars, and accidents have since decreased. Tom Turner, a respected safety advocate in the Bonanza community, analyzed NTSB records and found that between 1962 and 2007 there were an average of about three V-tail structural failures a year, most due to VFR flight into IMC, thunderstorm encounters, and airframe icing. During the same period the similar Debonairs and Bonanzas A36 sustained only 11 structural failures,” Twombly noted.

“Despite this history, many owners say the V-tail Bonanza is a safe and reliable airplane that offers typical Bonanza gravitas for tens of thousands of dollars less in acquisition costs,” Twombly said.

The AOPA said the plane’s biggest plus was value for money, while its biggest con was costly insurance as well as the fact that “early models have engines that might be harder to service.”