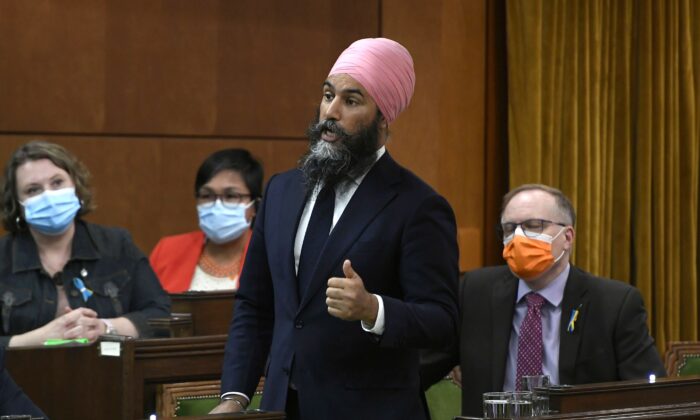 NDP Leader Jagmeet Singh rises during question period in the House of Commons in Ottawa on May 11, 2022. (The Canadian Press/Justin Tang)
Canada

“We fought hard and have been demanding, since the spring, that the Liberal government step up and give people some respect—the dignity to be able to afford their own groceries. And we have won,” Singh said during press conference in Thunder Bay, Ont., on Sept. 13.

The Liberals’ three-point plan will double the Goods and Services Tax (GST) credit for six months, and will provide a one-time top-up worth $500 to the Canada Housing Benefit for Canadians who spend at least 30 percent of their income on rent.

The plan will also give parents of children 12 years old or younger who do not have dental coverage up to $650 per year for dental care.

“These are things that will make a difference in people’s lives right now,” Trudeau told reporters after announcing the plan in St. Andrews, New Brunswick. “But they are also sufficiently targeted, [so] that we are confident that they will not contribute to increased inflation.”

In March, the NDP and the Liberals reached an agreement whereby the NDP would support the government on key issues until 2025 in exchange for the Liberals introducing national pharmacare and dental-care plans.

In his remarks, Singh said the NDP has “shown the way” to make the government “deliver for Canadians” while accusing the Liberals of being “out of touch.”

Poilievre said at a Sept. 13 press conference on Parliament Hill that the Liberals’ new affordability measures will increase taxes for Canadians and drive up living costs even further.

“Canadians cannot afford these tax increases and they come at exactly the worst time, and that is why Conservatives will lead the charge against them,” he said.

Poilievre called the new affordability plan “inflationary spending” and said it will “fail to solve the problem for everyday Canadians.”

“The problem with spending more money as a solution to inflation is that it simply pours more gasoline on the inflationary fire. And that is exactly what Justin Trudeau continues to do.”