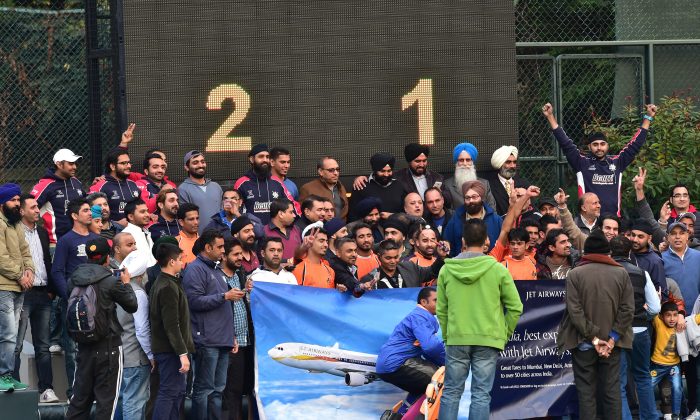 HONG KONG—The Hong Kong Hockey Association Premier Division 2014-2015 matches finished on Sunday Feb 8 with another thrilling encounter between the two clubs leading the division Khlasa-A and SSSC-A, after Punjab-A had points deducted for an infringement of the bye-laws.

The league Championship decider played at King’s Park was watched by a near full capacity crowd, all eager to witness a great game and to become fully involved…. They were not disappointed!

Super skills were on display from both sides, but it was SSSC-A that moved into the lead when they forced two penalty corners during the first quarter of the match. The first goal came after 10-minutes of play and the second was added with 18-minutes left of the first half.

Khalsa-A also had many first-half chances to score with driving runs by Arshad Mohammad, Ishtiaq Ahmed and Dev Dillon, but they were missing Lu Peng’s solid defence (out with hamstring injury) and Inderpal Singh (under suspension). Even Khalsa’s short corner routines were not running with the usual smoothness.

SSSC’s 2-goal cushion was so important to the win as in the later stages of the first half and particularly after Khlasa-A scored 10-minutes into the second half SSSC-A were put under severe pressure by the experienced Khalsa-A squad.

In the last quarter of the match Khalsa-A had many free hits from all around the scoring circle, made progress, but could not force the equaliser goal. Even from penalty corners of which they had a batch of three or four successively the ball would just not go into the goal. It was Singh Sabha’s day.

Kuldip S Uppal co-sponsor of the SSSC team was delighted with the team’s achievement.

“This year we played very well, we are playing very disciplined and we have the Pakistan team captain and a good organiser Johnny [Johal] all the time, doing all the planning and it’s like we have a whole bunch of people and the whole team works closely.

Johnny Johal commented: “All players should get the credit, I think the main winners are the fans that enjoy the game. It is hard to see these high level games in Hong Kong any more so both teams have their game in hand so it could fall to either side. Lucky [it fell to Sabha].”

“The standard of hockey in Hong Kong is quite high now so it is good for Hong Kong. We have played for a long time always playing good, but somehow we come into a trap without it being our fault. We fought back good this year [from last year’s disappointment] and now we focus on the Holland Cup,” added Kuldip.

The match was played in a great spirit with no confrontations, no surrounding of umpires which must be put down to the firm hands and excellent umpiring by Ernest Li and Tony Cheung.

Next Matches
Other divisional matches carry on until March 15, but the Premier squads take a short break until the start of the Holland Cup Knock-out competition.