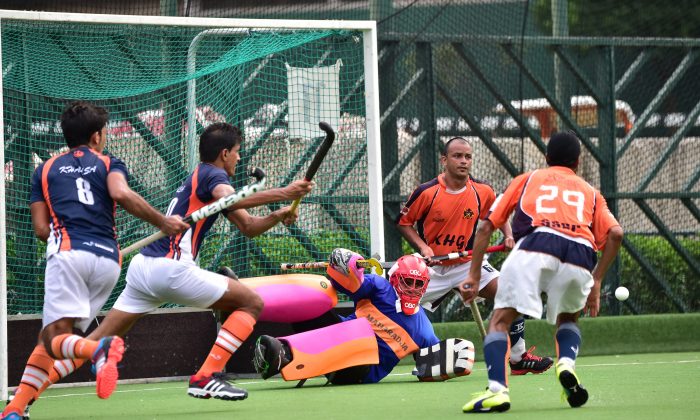 SSSC-A Goalie, Gurdeep Singh makes a fine save during the final of the Guru Nanak Cup Final against Khalsa-A at Happy Valley on Sunday Nov. 30, 2014. SSSC-A won an exciting final with a golden goal in extra time. (Bill Cox/Epoch Times)
HK Hockey

Hong Kong—The annual Guru Nanak Hockey Tournament, a nine aside, 10 minutes each way event with round-robin matches leading to Semi-finals and Finals was held at Happy Valley on Sunday Nov. 30. The Khalsa Diwan (Sikh Temple) organises the event, provides the prizes for winners, officials and supporters and arranges refreshments for the participants and onlookers during the tournament.

The 16 teams entered were split into Pools A-D for the round-robin part of the event with the 8-better teams fighting out for Cup Semi-final places from Pools A and B, and 8-lower level teams playing for Semi-final places in the Plate competition.

Cup Semi-final matches were played between Khalsa-A and NBC-A, and between Punjab-A and SSSC-A. Both of the Cup Semi-final games were played to a good standard, but the Punjab-A to SSSC-A match was particularly intense. It was a pity that one side had to lose, but in the end sound defence by SSSC gave them the win. Even the most elusive of the Punjab players could not penetrate the SSSC defence resulting in the win. Khalsa won the encounter against NBC-A setting up a Khalsa-A to SSSC-A Cup Final.

As might be expected with two top teams and only 9-players per side, it was a cagey final with good defending and attacking by both sides. SSSC were having a good day and managed to score first, they then defended extremely well keeping the key goal scorers of the Khalsa squad at bay, but even when the Khalsa stars did get opportunities near goal they missed the target or were foiled by good keeping by the SSSC goalie. But a series of penalty corners late in the game enabled Khalsa to equalise and force golden-goal extra time, with players reduced to seven per side.

Khalsa rushed goal wards at the start of extra time and Muhammad Arshad engineered a great goal scoring chance, but his strike was off target. SSSC then raced to the Khalsa goal and after couple of attempts scored the Cup winning goal.

Several people noted that the tournament seemed to have been downgraded this year as the number of teams reduced from 20 in previous years to 16-total. It was also noted that with the exception of KCC, only teams from the Indian and Pakistan communities were taking part this year. People seemed truly concerned that this long running tournament might be under threat.