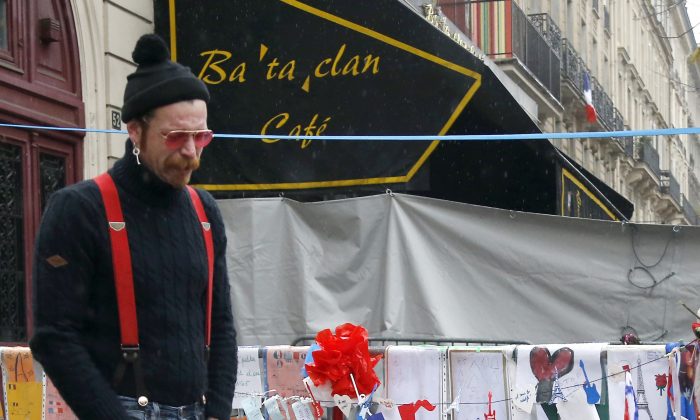 Jesse Hughes of the band Eagles of Death Metal pays his respects to 89 victims who died in a Nov. 13 attack, at the Bataclan concert hall in Paris, France, Tuesday, Dec. 8, 2015. Members of the California rock band Eagles of Death Metal are back at the ravaged Paris theater where they survived a massacre by Islamic extremist suicide bombers. (AP Photo/Jacques Brinon)
Europe

The frontman of Eagles of Death Metal, the band that was playing at Bataclan theatre in Paris last year when terrorists started shooting audience members, says that the attack and others across the capital proved that people should be armed while going about their business.

Until nobody has guns, everybody has to have them.
— Jesse Hughes, Eagles of Death Metal

Jesse Hughes, 43, an American, said that “Until nobody has guns, everybody has to have them.”

The band’s performance in September 2015 at the popular theatre ended with 90 fans dying, and dozens of others wounded as multiple gunmen entered the building and opened fire.

In an emotional interview with iTele, during which he cried, Hughes questioned whether France’s strict gun control policies have saved any lives.

“Did your French gun control stop a single [expletive] person from dying at the Bataclan? And if anyone can answer yes, I’d like to hear it, because I don’t think so.. I think the only thing that stopped it was some of the bravest men that I’ve ever seen in my life charging head first into the face of death with their firearms,” he said.

“I know people will disagree with me… but that night guns made them equal. And I hate it that it’s that way. I think the only way that my mind has been changed is that maybe until nobody has guns everybody has to have them. ‘Because I don’t ever want to see anything like this ever happen again and I want everyone to have the best chance to live and I saw people die that maybe could have lived. I wish I knew for sure if they could have had a better chance because there were some real angels, real wonderful people in that show that aren’t alive today and I really wish they were.”

Hughes, a member of the National Rifle Association and a supporter of Donald Trump, added to AFP that he always carries a gun with him when he’s traveling in America.

“That sucks. And I’m not paranoid. I’m not a cowboy… but I want to be prepared,” he said.

Hughes made the comments ahead of his band performing on Tuesday night in Paris, at the Olympia concert hall, for the first time since the attacks.

In another interview, with TV4, Hughes recalled hearing the gunfire in Bataclan.

“I knew exactly what was going on. I think I might have been the only person in the theatre who knew instantly,” he said.

He rushed backstage to look for his partner, and saw a terrorist at the end of the hallway, holding a gun.

“He didn’t see me. The door shut behind me and I was trying to back up, very sneaky – but he noticed me. And I thought I was dead,” he said.

“I waited for the shot to hit me. When he went to pull his rifle down, the barrel of his gun hit the doorframe, thank god. And when it hit the doorframe … I opened the door, and he started firing and his rounds shut the door behind me.”