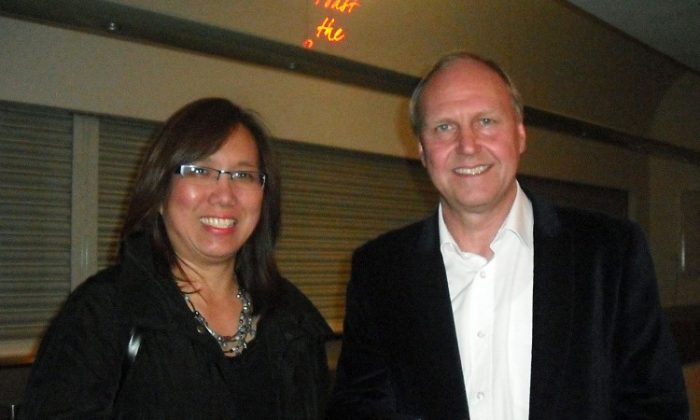 LONDON—Peter Graham, a singer-songwriter, founder of the World Culture Association, and a fellow at the Royal Society of Arts in the UK, said Shen Yun Performing Arts “has really got a good message” after it played at the London Coliseum on Thursday, Apr. 12.

He noted that Shen Yun—a New York-based production that says it is aiming to revive traditional Chinese culture through dance and the arts—is promoting “more freedom in China”.

Shen Yun draws upon several legends and moral tales that have been passed down throughout China’s 5,000-year history. Some audience members have mentioned that the performance seeks to promote freedom throughout the world and especially in China, a place where Shen Yun cannot perform despite its aspirations to promote the traditional culture.

He added, “We need to be able to forget little differences like that, but just to find our common humanity and common spirituality … and this is the big tragedy of modern China. They haven’t been allowed to find their spirituality … hopefully, we’ll see a change.”

Hi-tech backdrops are an integral part of Shen Yun’s performances. According to the company, they are interactive and highly colourful, showing scenes from ancient China, forests, mountaintops, and others. The backdrop is unique in that it is filled with movement and the dancers are able to interact with it.

Accompanying Mr. Graham was Hui Er, a finance officer, who said the show promotes “freedom of speech … freedom of belief,” adding that “I think this is important. [Shen Yun gives] the Chinese courage” to think freely for themselves. “You don’t need to be afraid of expression of belief … follow your heart. This is a message to give them strength,” she said.

The performing arts company was formed in 2006 and has toured in more than 100 cities around the world in striving to bring back the traditional culture of China—which the company says is divinely inspired—but mostly lost under six decades years of communist rule.

Mr. Graham said, “I’ve seen it over a few years actually, it’s got better and different, and it needs to continue because that message needs to come out. The simple things, to generate life after death … awareness in people, forbearance, forgiveness; it’s all very important.”

With reporting by Chin Liang and Jack Phillips