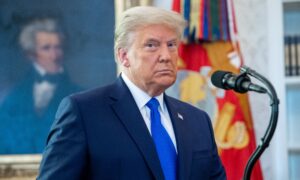 Singer at Trump Rally: ‘God Himself Is Going to Step In’

WASHINGTON—Singer Mary Ann Markarian compared the chaos of the post election situation to the story of Moses and the Red Sea, saying that she, like many Americans, believe providence still has a part to play in the nation’s destiny, and that there will be a miracle.

Markarian performed her song “Miracle in America” at one of the rallies in Washington on Dec. 12. Thousands gathered in the capital that day in marches and rallies, petitioning the government for fair elections and transparent counting. Similar grassroots protests have taken place every Saturday since the general election in capitals across the 50 states.

“I believe that God is going to do a true miracle, where no person, no supreme court, no legislature, no particular person’s going to get the honor for President Trump back in office, and I believe God Himself is going to step in,” she said.