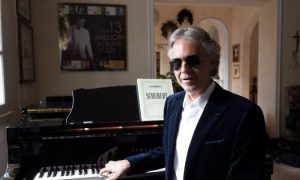 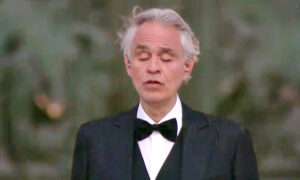 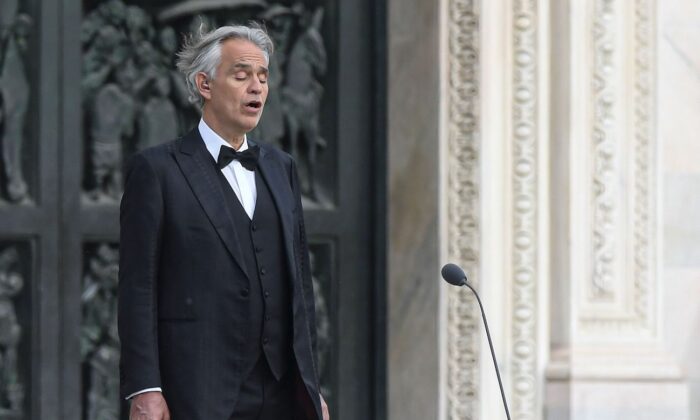 Italian tenor and opera singer Andrea Bocelli sings on a deserted Piazza del Duomo in central Milan, prior to an evening performance without public, on April 12, 2020. (Piero Cruciatti/AFP via Getty Images)
High-profile cases

Italian singer Andrea Bocelli has revealed he has recovered from the CCP (Chinese Communist Party) virus, commonly known as novel coronavirus, and has donated his blood plasma for research on treatment for the disease.

“The pandemic which has shaken the world has also affected—albeit mildly—me and certain members of my family,” the 61-year-old said in a statement to ABC’s “Good Morning America” on Tuesday.

“Out of respect for those for whom contracting the virus has had more serious consequences, I decided it would be best not to share the news. I certainly didn’t want to unnecessarily alarm my fans and also wished to protect my family’s privacy,” he continued.

The tenor added that he and his family members “were fortunate enough to have a swift and full recovery by the end of March,” and that he and his wife decided to donate their plasma this week to help aid COVID-19 research.

“Given the chance to donate blood to help find a cure for COVID, my response was an immediate ‘yes.’ A modest—but fundamental—gesture, through which I am playing my small part,” he said.

Bocelli also told Italian newspaper La Stampa that he received his results on March 10 after taking a swab test, and that his wife and two children had been infected as well. However, the singer said he did not suffer any serious symptoms besides a slight fever.

His recovery from the virus, which originated last year in Wuhan, China, came shortly before he gave a powerful Easter performance at Milan’s iconic Duomo cathedral on April 12, which was live-streamed all over the world.

Convalescent plasma is the liquid part of blood that is collected from survivors of the virus and contains antibodies, which may help fight infection, according to the Food and Drug Administration (FDA).

The plasma is currently being investigated by researchers in the treatment of COVID-19—the disease caused by the CCP virus—because there is no approved treatment and there is some information that suggests it might help some patients recover.

A new study (pdf) from researchers from the Mayo Clinic, Michigan State University, and Johns Hopkins University, tracked 5,000 patients who received convalescent plasma transfusions and found few side effects and low mortality in those receiving the experimental treatment.

Those who have fully recovered from virus and have had a complete resolution of symptoms for at least 14 days are being encouraged to consider donating plasma as it could potentially help save the lives of other patients. However, it must only be collected from recovered individuals if they are eligible to donate blood.