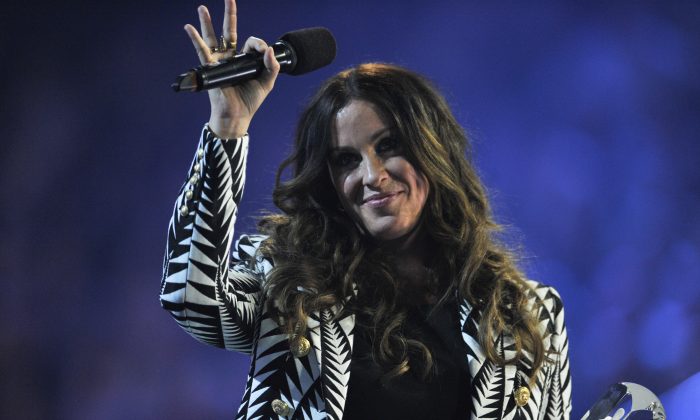 Alanis Morissette is presented an award at the 2015 JUNO Awards at FirstOntario Centre on March 15, 2015 in Hamilton, Canada. (Photo by Sonia Recchia/Getty Images)
Crime and Incidents

Singer Alanis Morissette is suing her former manager for allegedly stealing almost $5 million from her, said court documents filed in California, according to the Wall Street Journal.

In the lawsuit filed in the California Superior Court in Los Angeles, Morissette claims Jonathan Schwartz made more than 100 cash withdrawals over a 4-year period.

GSO Business Management, the firm Schwartz is a member of, is also taking action against him.

The “You Oughta Know” singer filed a separate suit in which she is suing both GSO and Schwartz for over $15 million in damages. She claims Schwartz allegedly allowed her to transfer $8 million out of her investment accounts without telling her she was taking the money from her savings.

Morissette fired Schwartz because he was not giving her information she had requested. The singer said she found out about the cash withdrawals made by Schwartz after her new business manager sorted through the singer’s records from GSO.

“When I fired Jonathan Schwartz and GSO two months ago, I had no idea the extent of the misconduct,” Morissette said in a statement provided by a publicist, according to the Wall Street Journal.

Schwartz claims that the large cash withdrawals during 2010 and 2014 were made to fund Morissette’s marijuana-growing business and to avoid extra trips to the bank because she allegedly spends a lot of money.

The singer has denied the claims made by the ex-manager.

“It is inconceivable that a sophisticated certified public accounting and business management firm—which counts some of the world’s wealthiest celebrities amongst its clientele—would permit a partner to withdraw millions of dollars in cash from a client’s account without a red light going off somewhere,” the complaint said, according to the Wall Street Journal.

Schwartz’s clients have included celebrities like Beyoncé and Mariah Carey.

In the suit, Morissette says Schwartz encouraged her to turn down performance offers, claiming that she didn’t need the money because she was financially secure. The singer claims that Schwartz did that so she wouldn’t look into her finances with more detail.

Meanwhile, GSO found out that Schwartz has been living a lavish lifestyle. The ex-manager recently took a $50,000 getaway to Bora Bora and returned from another vacation in the Caribbean with a gambling debt of $75,000. He apparently paid off the money he owed for that occasion.