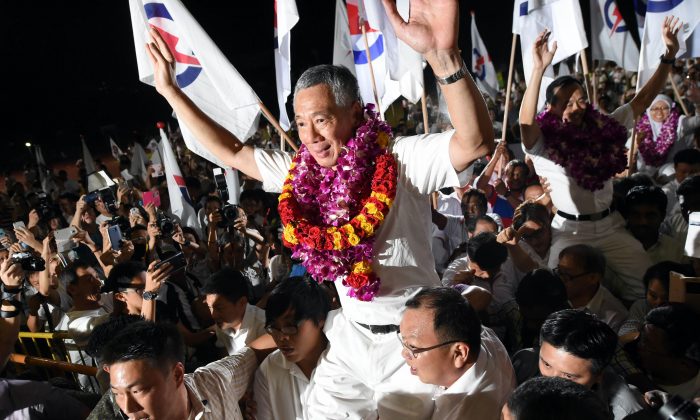 Singapore's Prime Minister Lee Hsien Loong, of the People's Action Party celebrates after winning the general election in Singapore on September 12, 2015. Singaporeans voted on September 11 in the most hotly contested election in the country's history after massive turnouts at opposition rallies boosted chances that a two-party system will emerge from half a century of domination by the ruling party. The People's Action Party (PAP), co-founded by the late independence leader Lee Kuan Yew and now led by his son, Prime Minister Lee Hsien Loong, is widely expected to retain a clear majority in the 89-seat parliament. AFP PHOTO / ROSLAN RAHMAN (Photo credit should read ROSLAN RAHMAN/AFP/Getty Images)
Asia & Pacific

Singaporeans Fall Back on Tried and Tested Party

SINGAPORE—Every four or five years, Singaporeans vote in general elections without ever asking the question: Which party can best run the government? That’s a no-brainer. It’s the same party that’s been ruling the wealthy Southeast Asian city-state for a half-century. The question most ask instead is how much voice should they give the opposition.

That explains the overwhelming majority that the People’s Action Party has won in every election since independence in 1965, including the last one on Friday, which returned it with an even greater share of the votes than before. It was a result that any political party in the world would salivate over—83 of 89 seats in Parliament and 70 percent of all votes cast.

In some ways, it was the direct outcome of the PAP’s relatively poor showing in the 2011 elections, when even though it won 81 of the 87 seats at stake, it garnered only 60 percent of the votes.

Singapore is among the most expensive cities in the world while being the ninth-richest nation on an annual per capita income basis, one spot ahead of the United States.

There was clear anger among the voters against the rising cost of living. Singapore is among the most expensive cities in the world while being the ninth-richest nation on an annual per capita income basis, one spot ahead of the United States. An open immigration policy promoted by the government to keep the economy robust had led to overcrowding and resentment against foreign workers seen to be stealing local jobs.

Restrictions on the media and freedom of speech—although less than in the early years after independence—remain in place. Income disparities are stark. On the one hand, executives are earning six-figure salaries, driving expensive cars, living in magnificent homes, and on the other, old retirees are eking out a living on meager pensions of about $1,000 a month while doing odd jobs.

All this gave the opposition fodder to launch an invigorated attack. Its campaign rallies attracted tens of thousands of people compared to a few hundred or 3,000 at the most for the PAP. Social media—the only alternative voice in a country where the mainstream newspapers, radio and TV stations are controlled by the government—were abuzz with talk of the opposition flexing its newfound muscles.

Some even began to talk about the possibility that the nine opposition parties combined would unseat the government, because for the first time in history they were together contesting all seats.

That, for many Singaporeans, was unacceptable. They wanted to give the opposition some voice—but not enough to take charge.

In a country that does not allow opinion polls, it is hard for voters to judge the strength of the opposition, and how many votes it should get without upsetting the apple cart. Unwilling to fall into the trap of over-voting for the opposition, traditionally risk-averse Singaporeans always end up going for the safe option. This time, the risk seemed larger. The fear that they could lose a government that they trusted and relied on tipped the undecided on the PAP’s side.

“There was a certain palpable concern that the PAP may come out of the election severely weakened. That resulted in the middle ground, the group of undecided voters, to rally behind the PAP, going back to a tried and tested party,” Eugene Tan, an associate professor of law at Singapore Management University, told The Associated Press.

Even the opposition acknowledged that.

“One of the things which I think probably did loom in people’s minds … is the fact that for the first time, all 89 seats are contested, and perhaps some people did feel that there was some risk (of the PAP faring poorly),” Workers’ Party chairman Sylvia Lim said at a victory parade in Aljunied. The party retained five seats by a slim margin.

“There is a perception that the opposition movement is growing strong. There could be a pushback on that, because I think people still feel comfortable with the PAP as a government,” she added.

So why do Singaporeans trust the PAP so much?

So why do Singaporeans trust the PAP so much?

For one, it is the party’s track record. After a period of British colonial rule, Singapore became part of the Malay Federation in 1963, whose other giant member was neighboring Malaysia. However, Singapore was kicked out of the union in 1965, with Lee Kuan Yew as the prime minister of the newly formed nation.

A fiery orator, master strategist and a no-holds-barred street fighter, Lee led the PAP to decisive victory in the 1968 general elections, and every one since, until his death in March.

Lee and other founding leaders in the PAP created a unique system of development for Singapore. Lee promoted meritocracy, attracted foreign investment through tax incentives, introduced English-language education, raised productivity and brooked no corruption. He also brooked no dissent and treated the opposition with contempt. Most opponents could not match his fighting skills—some were thrown in jail and others taken to court for defamation, leading to bankruptcy. Soon the opposition was emasculated.

Meanwhile, Singapore’s spectacular development continued amid restrictions on free speech. In many ways, Singapore became a nanny state, with the government masterminding social policies, including the racial mix among Chinese, Malays and Indians in public housing where a majority of its 5.6 million people live, how much they should save, what they could read and what they could watch on TV. Singaporeans seemed willing to pay that price for the economic gains.

After disenchantment became deeply evident in the 2011 elections, the government made amends. It cut back on immigration. The annual growth of foreign professionals, managers and executives fell from 45,000 a year to 13,000 last year. It made reforms to the pension scheme and the medical insurance. The government also reached out to the youth on hot-button issues—and the results paid off.

Ultimately, it was the people’s choice—even if forced by a set of circumstances unique to Singapore—that strengthened the ruling party at the expense of producing a more representative Parliament.

“I guess Singaporeans get the government they deserve, so I don’t want to hear any more complaints,” said opposition leader Kenneth Jeyaretnam.