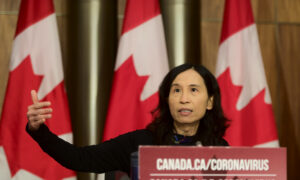 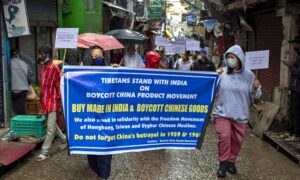 The Global Supply Chain and the Consumer Boycott of China: Impact of COVID-19
0 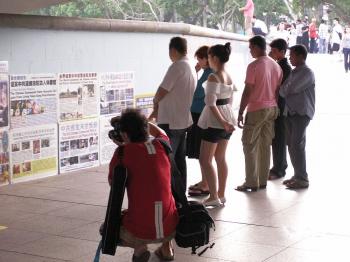 People read posters detailing the persecution of Falun Gong in China. The posters are at the walkway below Esplanade Bridge, in Esplanade Park, Singapore. (Mingguo Sun/The Epoch Times)
World

Facing deportation to China and possible torture, Falun Gong practitioners in Singapore are calling for international support in a case which has seen five arrested for putting up posters with Sticky-Tack in a park.

Police handcuffed four practitioners of the spiritual discipline at Esplanade Park on Oct. 5, citing “vandalizing public property” after they put the posters on a wall, something they had been doing for months. Three others, who were meditating, were not handcuffed—the police said “meditation is allowed.”

Later the same day, another practitioner, who had taken the posters to the park in his car, was arrested and detained.

Police are holding the passports of four who are Chinese nationals and all are required to return to the police station on Oct. 19 for a verdict.

Falun Gong, a spiritual practice, is persecuted in China by the Chinese Communist Party (CCP), and if the practitioners were deported to China, it is likely they would face torture, according to Levi Browde, a spokesperson for the U.S.-based Falun Dafa Information Center.

“There is a real concern that the practitioners could get deported to China,” he said. “If they are deported they are at risk of severe persecution.

The Falun Buddha Society of Singapore said in a statement they were “deeply saddened that the Singapore government was aiding the CCP in its persecution of Falun Gong.”

“Falun Gong practitioners abide by the tenets of truthfulness, compassion, and forbearance in their spiritual cultivation,” the statement said. “They do not hold common grounds with politics or power, nor do they willfully break the law.”

It is documented that the CCP promotes its persecution of Falun Gong abroad, putting pressure on other countries to further the campaign.

Worried that their daughter was a target for further persecution in China, Julie Zhu’e’s parents had sent her to Singapore a year ago to study.

“In China, where the CCP is persecuting us, I believed that the Singaporean government protected human rights, so I came here—but now I get locked up again and persecuted,” Zhu’e said. “I never thought this kind of thing would happen here.”

“Up to now, my parents don’t know that I was arrested because I haven’t told them about it, I fear they would be worried,” Julie Zhu’e said.” I don’t want to go back though, because I’ve been persecuted in China.”

Zhang Tao, a 45 year old engineer who has been in Singapore for ten years and is now a permanent resident, was confused about how the events unfolded. He has ferried the posters and materials to the park for the last several months.

When the police officers came to Zhang’s workplace they said they needed him to “assist with an investigation.” Once he got to the police station, however, he was handcuffed, put in a cell, and interrogated.

“They [police] asked me ‘How long have you been taking these posters to the park every day?’ So I think I must have been tailed otherwise, how does he know I do this everyday?” Zhang said.

Zhang also noted that the police went directly to his office soon after he arrived at work. He did not suspect it was a coordinated effort until spending half the day at the police station, when an official said, “They’re almost done with your friends, and then you’re next.”

Zhang said he knew then that they had arrested everyone.

Singapore human rights lawyer Madasamy Ravi who has represented Falun Gong practitioners in the past, said impounding the passports meant there is a likelihood of deportation. “It’s an irrational reaction, irrational application of the law,” he said of the police action. “They have stepped a bit far in justifying this on account of vandalism.”

Ravi said the Singapore government would not need to hold a trial to deport the practitioners and the immigration department has wide discretion. “They don’t even have to have a trial or anything, they can just say ‘You have interfered with Singapore,’ and that basically, you are not a law-abiding [citizen].”

He said he was unsure of any pressure from the Chinese Communist Party. “I’m not sure if they are doing this to please the Chinese authorities. One can easily make that conclusion. But definitely it is very unusual. It’s perturbing and quite suspicious for the state to do this.”

Singapore is not an electoral democracy and all religious groups are required to register with the government under the 1966 Societies Act—which the Falun Gong group had done.

As an apparent sign of relaxing restrictions, permits are no longer needed for private, indoor gatherings as long as the topic of discussion is not race or religion, according to Freedom House.

According to a 2009 Freedom House report Singapore is “partly free” on the three-tiered rating system—between “free” and “not free.”

The country is estimated to have one of the highest per capita execution rates in the world, according to Amnesty International.

The Epoch Times called the Singapore central police station about the arrests a number of times. A reporter left several messages on the phone of Francis Lim, the investigating officer and that of his colleague’s, but none were responded to.

The Epoch Times also spoke with the Singapore police’s public affairs office. They were aware of the incident, but questions were deferred and not responded to by press time.

The Epoch Times also contacted the Ministry of Foreign Affairs on Oct. 12 and Oct. 13, attempting to find out how departmental and ministerial discretion in the case of deportations is exercised, and whether factors such as religious persecution in the target country are considered. The Ministry did not respond by press time.