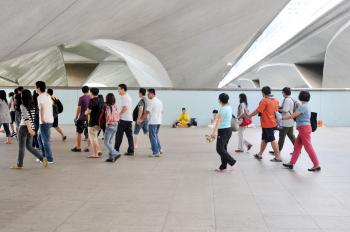 Falun Gong practitioner Gao Hongmei (center) meditates at Esplanade Park in a high traffic zone for Chinese tourists. Police have told the Falun Gong group that they are not allowed to meditate there starting in November, when APEC starts. (Mingguo Sun/The Epoch Times)
International

By Charlotte Cuthbertson and Matthew Robertson
Print
Increasing pressure is being put on Falun Gong practitioners to stay away from certain public areas during the Asia-Pacific Economic Cooperation (APEC) Summit, set to be held in Singapore next month.

Singaporean border officials denied entry to two Falun Gong practitioners on Oct. 19 and 22 who had previously frequented the country, one from Indonesia and the other from Malaysia. One was told the officials had orders from “higher-ups” to deny her entry and the other said he was given a “vague explanation” for the denial.

Six other practitioners were arrested earlier in the month at Esplanade Park after meditating and sticking up posters depicting the persecution of Falun Gong in China, approximately 2,600 ft. from Suntec City, the center of the APEC meetings. Those putting up the posters were charged with "vandalizing public property" and will receive a verdict on Nov. 2.

Local practitioners were summoned to two meetings on Oct. 19 and 22, one with police, the other with officers from the Ministry of Home Affairs. In the first meeting, the police intimated, and in the second the officers stated explicitly, that Falun Gong practitioners were expected to “stay clear” of Esplanade Park as of Nov. 1.

President of the Falun Buddha Association, William Huang attended the first meeting, but not the second. He was told the second meeting was very explicit.  “They do not want to lose face in front of foreign media and international leaders,” he was told. “This is about Hu Jintao coming to APEC and Falun Gong should be kept out of sight.”

Gopalan Nair, a lawyer who spent three months in a Singaporean jail for insulting two judges on his blog, said the Singapore government is trying to get closer to China. “They would do anything to please China,” he said from his practice in California. “And even this Falun Gong issue, Singapore will bend over backward for China.”

Nair was born in Singapore and was shunted out of the country after his jail term ended and told not to come back. “It wasn’t a judge who made a decision," he said. "The judge has nothing to do with my leaving the country. I was just picked up after leaving jail and driven straight to immigration.”

The CCP is known to exert political pressure abroad to suppress Falun Gong activities. There has been a pattern of arrests and alleged harassment of Falun Gong adherents in Singapore around the times that Chinese leaders visit.

The adjunct professor on the faculty of Law at the Australian National University and a specialist in international human rights law, Peter Bailey, said China was a growing force in the region and both Singapore and Australia had a duty to ensure human rights were respected.

“They [Singapore] need to say that people visiting or residents should be allowed to practice their beliefs as long they are complying with the law," he said.

Bailey said a recent Association of South East Asian Nations (ASEAN) meeting, which included Singapore, had specifically mentioned Falun Gong in plans to develop a regional human rights commission. It was stated that Falun Gong practitioners should not be persecuted and should be allowed to practice freely, he said.

“Everyone has a right under the International Covenant on Civil and Political Rights to freedom of assembly, freedom of expression, and freedom of religion,” Bailey said.

The Singapore Constitution protects freedom of religion under Article 15, which states, in part, “Every person has the right to profess and practice his religion and to propagate it.”

Local Singaporean activist Seelan Palay said the recent arrest of a Falun Gong practitioner was the first under the new Public Order Act, which gives police wide discretionary powers during special events such as the APEC.

“[The law] prevents even the 'assembly' of one person,” Palay said. “Regarding relations between Singapore and China, well, let's say that they are very comfortable with each other and China is perhaps even learning a few lessons from Singapore."

Huang said that in a case several years ago when a police officer was asked to give a statement in court, the officer said there is a special operation order about Falun Gong, and he was just following orders.

The Falun Buddha Association, which promotes understanding of the practice, has given introductory classes and workshops since 1999. The organization “tells people the truth of the persecution," Huang said.

Regarding the arrests earlier in the month, a spokesperson for the police said it was “speculation” that they were politically motivated.

The Epoch Times contacted the Ministry of Home Affairs to find out the legal basis for the alleged order for Falun Gong practitioners to stay away from Esplanade Park. A spokesperson for the ministry said to call back, but calls were not answered.