Singapore and a Safer World 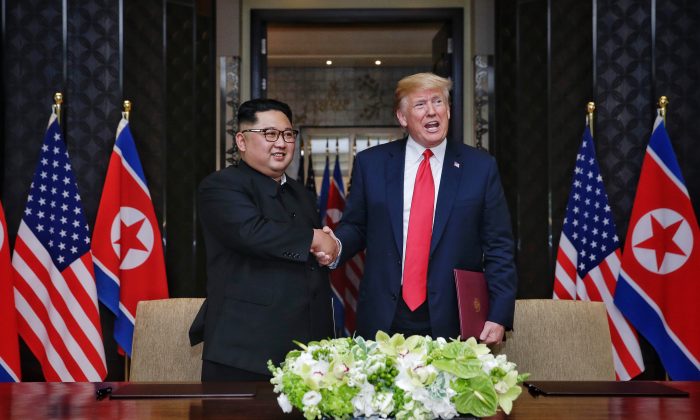 The Singapore summit, attended by about 3000 international journalists, followed decades of an uneasy stability maintained in Asia in large measure because of American-led security structures. President Trump conceded much to chairman Kim and received virtually nothing concrete in return.

Former Canadian diplomat in South Korea, James Trottier, noted that the rapprochement between Trump and Kim is useful for regional peace, but runs the risk of negative consequences should the relationship sour. For now, he adds, a resumption of last year’s bellicose bilateral threats seems unlikely—to the relief of South Koreans, Japanese, and the world.

Trump announced in Kim’s absence at a post-summit media conference that he intends to end the annual joint military exercises by South Korea and the United States. The recent ones nearly derailed the South/North Korea summit; this initiative was hopefully a confidence-building initiative without undue risk.

Read More
Examining the Entrails of the Singapore Summit

Trump’s rationale—they cost too much—was unconvincing, especially as the American Congress recently increased the U.S. defence budget to $716 billion, up 13 percent from 2017. The security of 50 million South Koreans living beside one of the most repressive regimes on earth is extremely important.

On the key issue of verifiable and irreversible denuclearization, the joint leaders’ statement indicated only that North Korea agreed to follow-up nuclear talks with U.S. Secretary of State Mike Pompeo and other U.S. officials “at the earliest possible date.”

Trump argued at his press conference that the 403-word statement with Kim was “very comprehensive” and “(absolutely) plain” in terms of language on denuclearization. He then added that U.S. officials had worked on the substance of the statement for months and that the document was “far down the line.” Asked why it lacked details on how the denuclearization process would work, Trump offered only, “Because there was no time. I’m here one day.”

Trump also told journalists that while he had agreed to something the North Koreans had long sought—a meeting of their leader and the American president—he thought it was as beneficial to the United States as it was for North Korea. Economic sanctions on North Korea, he stressed, would “come off when we are sure that the nukes are no longer a factor.”

He then weakened his “maximum pressure” position of the past 18 months by adding, “I actually look forward to taking them off” and that it was “OK” that China had recently eased up on sanctions enforcement at its border with North Korea.

The president hinted that he might eventually bring about North Korea’s goal of having U.S. forces leave the Korean peninsula. “At some point,” he noted, “I want to bring our soldiers back home.” The previous day, U.S. Defence Secretary Jim Mattis had told reporters he didn’t believe that troop levels were on the agenda. When asked if he would know if such discussions were planned, he said, “Yeah, I sure would.

Trump claimed to have raised the issue of North Korea’s egregious human-rights abuses but didn’t focus on them. Kim, he said, is “very talented,” since taking over North Korea in his 20s.  Completely overlooked was that if the hermit kingdom is finally ready to join the international community, it must for the first time offer human dignity to its citizens.

Benedict Rogers, a British human rights activist specializing in Asia, notes, “People have been jailed, tortured or executed …. The atrocities committed by (the Kims) (must not be) swept under the carpet. The U.N. Commission of Inquiry … has recommended that Kim Jong Un’s crimes be called to account at the International Criminal Court (ICC).”

No evidence was cited by Trump for why he feels his nuclear negotiations with North Korea will produce a different outcome from the last 25 years of inconclusive talks and violated agreements by three generations of Kims.

“My whole life has been deals, I’ve done great at it,” Trump noted.

The president gave the reason for this deal: “If I can save millions of lives by coming here, sitting down, and establishing a relationship with someone who’s a very powerful man, who’s got firm control of a country, and that country has very powerful nuclear weapons, it’s my honor to do it. I’ll do whatever it takes to make the world a safer place.”

Overall, the president appeared more willing to reach an agreement with totalitarian Kim than with G7 colleagues in Canada. He accepted significant compromises, including on his priority of denuclearization.

As Human Rights Watch Advocacy Director John Sifton noted, “the North Korean people might well suffer even more since the Kim-Trump deal might well burnish and entrench a despot’s rule. The hundreds of thousands of North Koreans being brutalized daily in prisons, labor camps and gulags in the mountains are not ‘winners’ now and they won’t be tomorrow. Nor are the millions of other North Koreans who are routinely subjected to forced labor and deprived of basic rights, ranging from freedom of speech and assembly to adequate food, housing, education, and health care”.