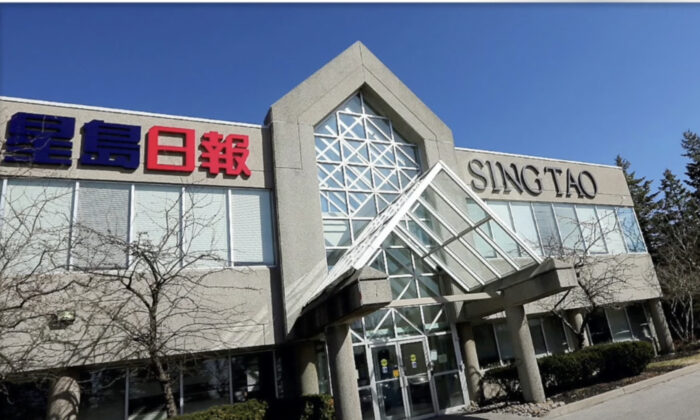 Shareholder's company in financial crisis in China
By Nie Law

The Canadian Sing Tao Daily, a subsidiary of Sing Tao News Corporation in Hong Kong, announced on July 25 to end its daily print editions in Toronto and Vancouver from August 28.

Eighty-three employees will be losing their jobs.

According to insiders, the company has been losing money for some time.

Ming Pao Canada also quoted news that the Canadian Sing Tao Daily had to stop printing because the headquarters of Sing Tao News Corporation, decided not to bear the losses.

Before the handover of Hong Kong in 1997, Sing Tao Daily had been using the year of the Republic of China Calendar (Year 1 is 1912, 2022 is the year 111) and called the Beijing government “Communist Authorities” or “Communist of China” in news reports.

Sing Tao Daily has eight branches overseas; the news operation and editions are under Larry Lee, the former president and editor-in-chief of China Daily (the Chinese Communist Party’s mouthpiece). It has gradually developed into a pro-Beijing media.

Edward Chin, a senior hedge fund manager in Canada’s broadcasting industry, told the Epoch Times that Sing Tao Daily was popular in Canadian Chinese media from the early to mid-1990s.

He believes the suspension of publications was due to economic reasons: “It was losing readers.”

Kwok then became the CEO and major shareholder. The Kaisa Prosperity company is a well-known mainland China property management enterprise but is now believed to be in a financial crisis.

‘No More Fund from CCP’

Shi believes that Sing Tao Daily ended printing papers because the CCP could not provide funds.

During Larry Lee’s tenure as the editor-in-chief for International News of Sing Tao Daily, it was accused of defamation by Falun Gong practitioners for publishing a full-page report smearing propaganda from CCP to prosecute Falun Gong.

Victor Ho, the former editor-in-chief for the B.C edition of Sing Tao Daily, says this is a blow to the foreign propaganda project of CCP.

In August 2021, the American Sing Tao Daily was classified as a “foreign agent” by the United States Department of Justice.