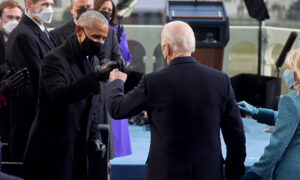 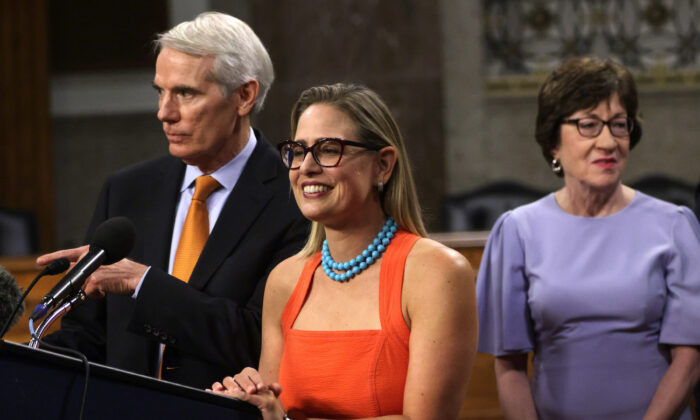 Sen. Kyrsten Sinema (D-Ariz) indicated on Wednesday that she does not support the $3.5 trillion price tag for a spending bill backed by most Senate Democrats.

In a statement, Sinema said that she supports “many of the goals in this proposal.” However, she added, “While I will support beginning this process, I do not support a bill that costs $3.5 trillion.”

“In the coming months, I will work in good faith to develop this legislation with my colleagues and the administration to strengthen Arizona’s economy and help Arizona’s everyday families get ahead,” she said.

Her remarks come just before she and 49 other Democrats joined with 17 Republicans in the Senate voting 67-32 late Wednesday to advance a bipartisan $1.2 trillion infrastructure bill, which includes $550 billion in new spending.

The $1.2 trillion infrastructure bill and the $3.5 trillion spending bill will together fund President Joe Biden’s jobs and families plan.

Democrats want to add $3.5 trillion to Congress’s budget via budget reconciliation—which requires only a simple majority in the Senate—to bypass a Senate filibuster that would otherwise require the measure to secure support from 10 Republicans.

The bill would still require the support of all 50 Senate Democrats and Vice President Kamala Harris’s support with her tie-breaking vote to pass. Lead Senate Democrats have said they want a vote to start congressional talks on the budget resolution before the August recess, and hope to pass the measure some time in the fall.

A number of House Democrats reacted to Sinema’s statement in an all-or-nothing fashion, threatening to put a hold to the other $1.2 trillion infrastructure deal.

Rep. Alexandria Ocasio-Cortez (D-N.Y.) issued a statement on Twitter criticizing Sinema, saying, “Good luck tanking your own party’s investment on childcare, climate action, and infrastructure while presuming you’ll survive a 3 vote House margin—especially after choosing to exclude members of color from negotiations and calling that a ‘bipartisan accomplishment.’”

Rep. Mondaire Jones (D-N.Y.) threatened to put a hold to the other $1.2 trillion infrastructure deal, writing on Twitter, “Without a reconciliation package that meets this moment, I’m a no on this bipartisan deal.”

Moderate Democrat voices have yet to express a definitive stance on the $3.5 trillion measure. Sen. Joe Manchin (D-W.Va.) has not said how he will vote, while Sen. Jon Tester (D-Mont.) has said he will vote to start the process but hasn’t commented on what conditions would be required for him to support the final product.

House Speaker Nancy Pelosi (D-Calif.) previously said that she will not hold a House vote on the $1.2 trillion infrastructure bill if the $3.5 trillion bill does not pass the Senate.