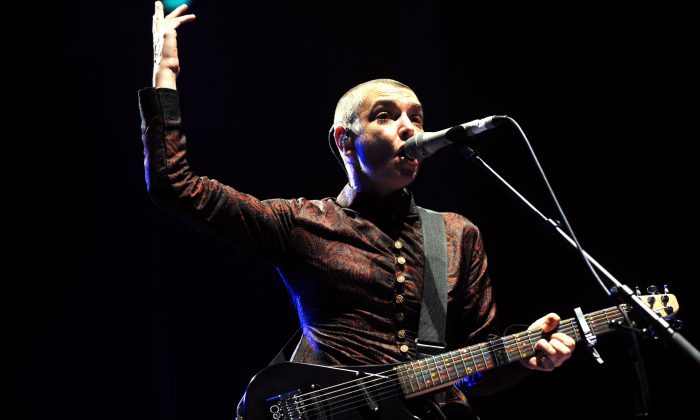 Sinead O’Connor Says She Will Sue Family, Claims They Abandoned Her ‘For Being Suicidal’

Singer Sinead O’Connor, who went missing on May 15 after a bike ride in Chicago, wrote a strong open letter on Facebook to her ex-husband, just hours after being found.

In the Facebook post, O’Connor lashes out against her former partner, John Reynolds, her eldest son Jake, and her father—saying she will sue them.

The open letter appeared after the singer went for a bike ride on May 15 at 6 a.m. and disappeared. Police believed she was at risk of suicide, according to TMZ. Officials sent out an alert classifying the singer as “missing suicidal.”

Authorities said on May 16 in the afternoon that O’Connor had been found safe, no other details have been released.

O’Connor, writing to her ex-husband, referred to Jake as “evil son of ours.”

“You all abandoned me FOR BEING SUICIDAL,” the singer wrote to her family.

“Every one of you had better pray I die. Because I’m suing the [expletive] lot of you for what you’ve done to me if I manage to live through it,” added O’Connor.

The singer then went on to say that her father and her ex-husband had pushed her to get an abortion when she was pregnant with her son Jake.

“If you and my father had got what you pushed for, Jake wouldn’t even [expletive] be alive. Only I fought because he was my baby and I LOVED HIM, CHILD AS I WAS MYSELF,” she said.

“You and my father dropped me off at the hospital to get rid of him, [expletive] sake. How many abortions have you forced women successfully to have John? Have you counted? I stopped counting about Sixteen years ago,” said the singer.

She then told her eldest son to take custody of her younger son, Shane.

The singer also claimed she had to “run to another continent just to stay alive.”

“None of you will ever see me again because of what you’ve done. If I manage not to kill myself, you’ll be paying the medical costs which have been and will continue to be involved with that, since you were and remain,” vowed O’Connor.

She ended the letter by saying she’s taking her family members to court.

“I want damages. I have been unable to work. I have lost last year’s income and this year’s. I have had enormous medical expenses, and enormous trauma because of your torturing of me,” O’Connor said.

“Jake, kindly go to the court on Tuesday and take custody your brother from Tusla. My lawyer will be making the illegal way yourself and Donal got him into Tusla (lying to the cops etc) known to the judge,” she wrote.

“Expect to be in trouble. In fact you’d best bring a lawyer of your own. And do not abandon your brother or any other of my babies again. What you have done to your brother and your mother is LITERALLY criminal,” O’Connor added.

Monday’s disappearance wasn’t the first time O’Connor had gone missing. Last November, she received medical treatment after an alleged overdose of pills in a hotel in Ireland.

O’Connor, 49, left a suicide note on that occasion, according to TMZ, saying, “I have taken an overdose. There is no other way to get respect. I am not at home. I’m at a hotel, somewhere in Ireland, under another name.”

She said in the letter she had been “Howling crying for weeks. And been told by them all to go [expletive] myself. I’m invisible. I don’t matter a shred to anyone.”

O’Connor achieved international fame for her cover of the song “Nothing Compares 2 U,” originally written by Prince.

On May 6, court documents were filed by comedian and TV personality Arsenio Hall against Sinead O’Connor—for her controversial post to Facebook earlier this month.