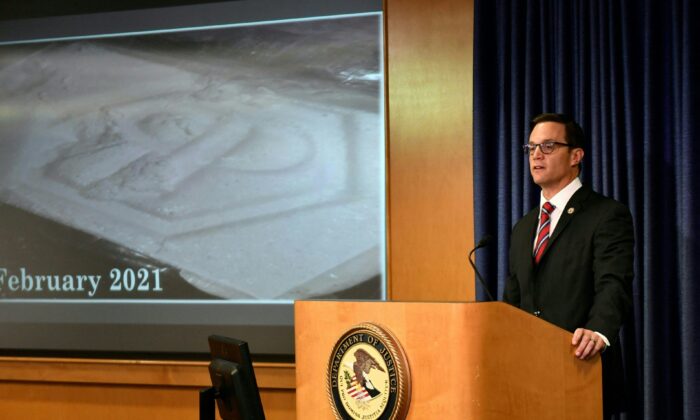 A major drug trafficker and money launderer for the Mexican Sinaloa Cartel was sentenced to 188 months in prison for supervising the smuggling of multi-kilogram quantities of cocaine, methamphetamine, and heroin from Mexico into the United States. through Southern California and smuggling drug proceeds back to Mexico.

His prison term follows the sentencing of at least 27 others involved in a transnational drug trafficking and money laundering scheme and after a local law enforcement effort last year resulted in the biggest drug bust in southern California history.

The Department of Justice reports that Roberto Gallegos-Lechuga, 39, of Sinaloa, Mexico, pleaded guilty to conspiracy to commit international money laundering in July 2021. With the help of Mexican authorities, he was arrested and extradited from Mexico to the United States in March 2020.

Gallegos-Lechuga coordinated the smuggling of large quantities of illegal narcotics through ports of entry in Southern California, according to court documents.

“He also supervised and managed couriers who smuggled hundreds of thousands of dollars in cash at a time, from the illegal sale of drugs, from the United States to Mexico as part of the cartel’s ongoing efforts to promote drug trafficking,” the DOJ states in a news release.

“Those who manage drug trafficking and money laundering efforts for the Sinaloa cartel, one of the most violent criminal organizations in the world, will continue to face justice in this district,” U.S. Attorney Randy Grossman for the Southern District of California said in a statement. “Stopping the flow of funds to drug cartels and of deadly drugs into the United States continues to be a priority for us and our law enforcement partners.”

Gallegos-Lechuga’s sentencing is the culmination of years of work conducted by Homeland Security investigators and their partners targeting the Sinaloa Cartel. The investigation “highlights HSI’s dedication to going after both cartel drug trafficking and money laundering activity,” Homeland Security Investigations-San Diego Special Agent in Charge Chad Plantz said. “The sentencing sends a resounding message to Transnational Criminal Organizations that HSI and our partners are unyielding in our pursuit of justice.”

The Sinaloa Cartel “is one of the oldest and more established drug trafficking organizations in Mexico,” according to the DEA. “Though its birthplace and stronghold is the Mexican State of Sinaloa, the Sinaloa Cartel controls drug trafficking activity in various regions in Mexico, particularly along the Pacific Coast. Illicit drugs distributed by the Sinaloa Cartel are primarily smuggled into the United States through crossing points located along Mexico’s border with California, Arizona, New Mexico, and west Texas.”

The cartel has taken operational control of the border from California to El Paso, Texas. Several factions are warring for control of the cartel in some Mexican states and near El Paso after its former leader, Joaquín “El Chapo” Guzmán, was sentenced to life imprisonment in the United States in July 2019.

The cartel’s network has reached far into California’s high desert and throughout other areas of the country, capitalizing on a network made possible through illegal immigration.

Last June, officials from the Los Angeles County Sheriff’s Office, DEA, and others, landed the largest illegal drug bust in the county’s history—in Antelope Valley, roughly 300 miles north of the southern border. Officials found and destroyed 70 to 80 houses filled with illegal marijuana in the open desert allegedly being run by cartels and operated by illegal immigrants. Law enforcement officers leveled the operation with bulldozers, estimating in one location alone they found $50 million worth of product.

LA County Sheriff Alex Villanueva, who spearheaded the operation, told Fox News at the time that “illegal pot grows have gunmen who threaten neighboring residents, they divert water away from local farmers, and are hubs for criminal activity.”