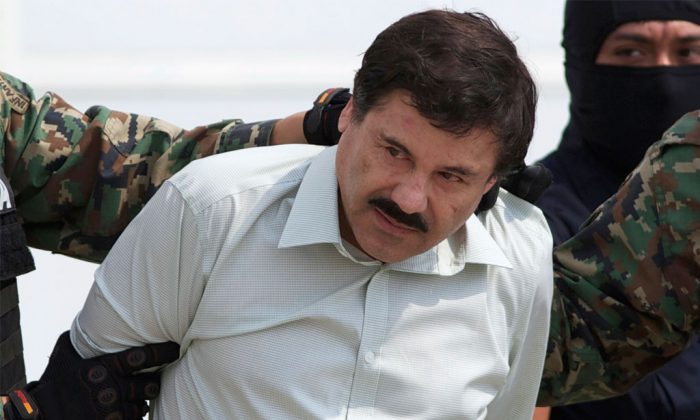 Joaquin "El Chapo" Guzman, the head of Mexico’s Sinaloa Cartel, being escorted to a helicopter in Mexico City following his capture overnight in the beach resort town of Mazatlan, on Feb. 22, 2014. (AP Photo/Eduardo Verdugo)
Americas

Ismael Zambada Imperial, alias “El Mayito Gordo,” was arrested in Sinaloa state and transported to Mexico City, the official told The Associated Press. He spoke on condition of anonymity because authorities expected to make an official announcement later in the day.

The official said Zambada Imperial assumed a more prominent role in the cartel this year after his father became the top leader following the capture of capo Joaquin “El Chapo” Guzman in February.

He is the third of Zambada’s sons to be detained in recent years.

Jesus Vicente Zambada Niebla was arrested in 2009 and extradited the following year to the United States, where in 2013 he pleaded guilty to a drug trafficking charge.

Serafin Zambada was arrested at the end of 2013 at an Arizona border crossing. He also pleaded guilty to drug trafficking charges in September and faces a sentence of at least 10 years in prison.

The Sinaloa cartel is considered to be Mexico’s largest drug trafficking organization, with a global reach as far away as Australia.

The U.S. and Mexican governments have offered multimillion-dollar rewards for information leading to the capture of “El Mayo” Zambada.