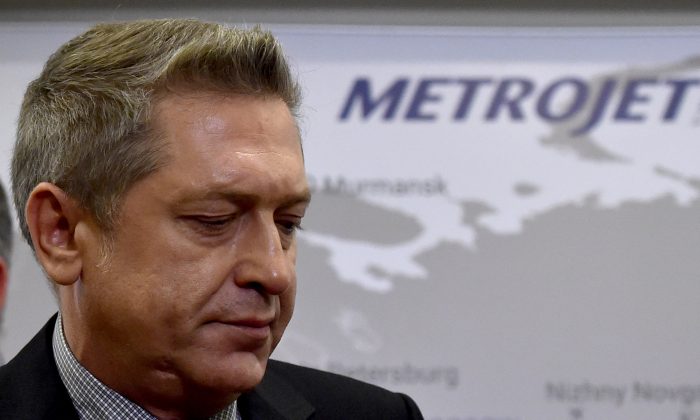 Sinai Crash: What Do We Really Know?

Flight KGL9268 was only 22 minutes into its journey when it disappeared from radar screens over the Sinai Peninsula, having apparently broken up in midair. The disaster carries sinister echoes of earlier tragedies—not least the explosion of Pan-Am Flight 103 over Lockerbie in 1988. But with a concrete explanation so far not forthcoming, what do we actually know?

Any findings from the plane’s flight recorder which apparently captured “unusual sounds,” are yet to be made public. That has left plenty of space for theorizing and competing explanations.

Since this particular plane sustained a tail strike when it hit the runway in Cairo in 2001, one theory is a technical fault, similar to the 1985 fate of Japan Airlines Flight 123, where the aircraft’s tail fell off in flight—the resulting crash killing 520 people.

But along with the chairman of Egypt’s civilian airport stating the technical checks on the aircraft prior to takeoff were successful, the aviation authorities have claimed all the certifications of Flight KGL9268 were satisfactory—and human error by the aircrew has already been ruled out by the airline.

In the Sinai Peninsula, where the terrorist threat is high and political sensitivities intense, circumstances are hardly on the investigators’ side.

What’s fast becoming the dominant theory is that the aircraft exploded as a result of terrorist action, just as Pan-Am Flight 103 did. Oddly enough, that version of events has been most vocally advanced not by Egypt or Russia, but by the U.K. and the United States.

On Nov. 4, following a Cobra meeting of top security, military, police, and government officials, British Foreign Secretary Philip Hammond announced that intelligence passed on by the U.K. security services had led Britain to the working hypothesis that a bomb was planted on the aircraft by Islamist militants.

American security officials have also reported that having intercepted communications involving the region’s Islamic State (ISIS) affiliate, Sinai Province, they gather the cause of the crash was a bomb being planted on board the aircraft. On Nov. 3, the U.S. media reported that a military satellite detected a heat flash over the Sinai Peninsula at the time of the crash. Egyptian authorities are maintaining that such tentative conclusions are premature as no evidence of any terrorist attack has so far been found.

Still Too Soon to Say

Investigating any air crash thoroughly takes time in the best possible conditions as it demands that as much forensic evidence as possible is collected and analyzed. In the Sinai Peninsula, where the terrorist threat is high and political sensitivities intense, circumstances are hardly on the investigators’ side.

There are also reputational concerns—Egypt, whose economy is deeply fragile, will be desperately worried that the disaster will badly damage its crucial tourism industry. Those worries appear to be well-founded, since various European carriers and countries, including the U.K. and the Netherlands, have already suspended flights to Sharm el-Sheikh.

Still, terrorist action clearly cannot be ruled out. The Egyptian government has been fighting against Islamist militias in the Sinai Peninsula for years. The group Sinai Province is very active and has killed hundreds of Egyptian military and police personnel. Meanwhile, less than a month before this disaster, ISIS called for a “holy war” on Russia and announced death threats to President Putin due to Russia’s (now rather shakier) alliance with the Assad regime in Syria, where the ISIS “caliphate” is headquartered.

Russia is sensibly sticking to the line that it’s too premature for concrete conclusions and, even if we’re running with the terrorism hypothesis, there are some rather glaring unknowns. It’s not clear why Sinai Province, whose principal conflict is with Egypt, would risk inviting international retaliation by planting a bomb on a Russian tourist flight.

But if it does turn out this was definitely a bombing, it seems the perpetrator may have had ample opportunity to plant a bomb on the aircraft. Reports have emerged that the security at Sharm el-Sheikh airport was lax to say the least—with staff not scrutinizing baggage effectively and some passengers boarding aircraft with overly large containers of liquid. Since the terrorism risk is so high in Egypt and the Sinai in particular, such poor oversight would be quite shocking if the reports are accurate.

Tight airport security is undeniably crucial to preventing terrorist attacks. The attempted attacks by Richard Reid on a flight to Miami in December 2001, the 2006 liquid bomb plotters, and Umar Abdulmutallab, who was badly burned when a bomb sewn into his underwear failed to detonate fully on a flight to Boston in 2009, spurred a dramatic increase in security provisions at airports.

They also prompted changes in terrorism laws in the U.K. with the introduction of the Anti-Terrorism, Crime and Security Act 2001, which now grant the authorities much greater powers of surveillance at airports, powers to detain aircraft where there is a threat to commit an act of violence on the aircraft under section 86 of the Act and make it much easier to stop passengers—think of the controversial Schedule 7 Terrorism Act 2000, which allows British police to hold and question passengers for up to nine hours without even having to demonstrate “reasonable suspicion” of terrorist intent.

Whether similar measures would have averted the fate of Flight KGL9268, of course, cannot be known for sure—especially not without a concrete account of what ultimately happened to it. This puzzle will be put together terribly slowly, and even then, we may have to wait a long time before we can draw any real conclusions.

David Lowe is a principal lecturer in law at the Liverpool John Moores University, U.K. This article was previously published on TheConversation.com