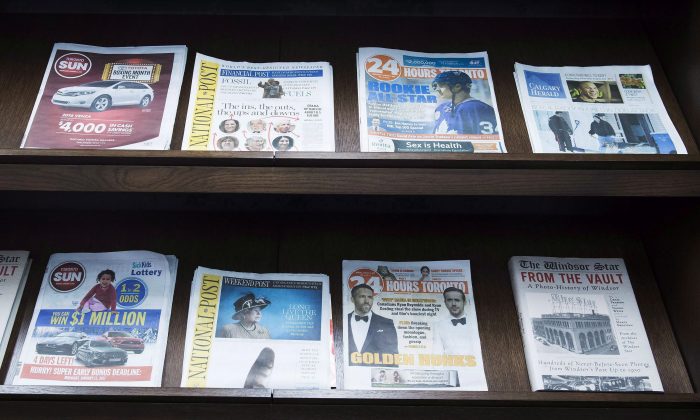 90 percent of the $5.6 billion spent by Canadian companies on digital ads went to foreign web platforms
By Jared Gnam

With advertising dollars once spent in local newspapers being gobbled up by foreign tech giants Google and Facebook, the head of one of Canada’s largest unions says a change to federal income tax laws could be key in saving local newspapers.

Paul Morse, president of Unifor, the union that represents 2,000 media workers in Ontario, says the government could make simple policy changes that would help the media industry’s finances to the tune of millions.

But this tax incentive doesn’t apply to digital media, based on an interpretation of a section of the Income Tax Act made in 1996, before the digital age took off. So Canadian companies continue to get a tax break when they advertise with foreign-owned websites, with the cost fully tax deductible as a business expense under the act.

This means Canadian companies are buying their ads on Google and Facebook, with their huge readership, instead of on Canadian-owned sites.

This loophole, says Morse, is funnelling millions in advertising revenue away from Canadian online news companies and could be quickly fixed if the Income Tax Act is amended.

“Advertisers in print publications get a tax break as they are printing in Canadian papers, but the same tax break doesn’t happen on the Canadian online side,” he says.

“There’s no difference that the Canadian online advertisers have with the foreign advertisers. It’s a level playing field—and that’s not fair.”

According to a study funded by Friends of Canadian Broadcasting released this week, up to 90 percent of the $5.6 billion spent by Canadian companies on digital ads was doled out to U.S. or foreign web platforms rather than domestic domains.

The organization argues for reform of the federal Income Tax Act so that advertisements purchased on foreign-owned websites are no longer tax deductible.

Six more local newspapers shut down for good last week, prompting Morse and some in the news industry to push harder for federal support to combat the decline of local journalism and guard against the rise of fake news.

A Postmedia Network internal memo said it is looking to slash 10 percent of its total salary costs across the publishing chain and confirmed it will start with the closure of six community newspapers in Alberta and Ontario.

Meanwhile, three small-town Postmedia newspapers in Manitoba and Ontario will also halt print production and move to online only, including Ottawa Valley’s 163-year-old Pembroke Daily Observer, which will be reduced to a single reporter covering a community of more than 23,000.

“In terms of the immediate crisis, we need the federal government to take some action to help support [local newspapers]. Otherwise, we are not going to be left with independent, quality local news at all and it’s not a good thing for our way of life and for our democracy,” Morse says.

“We need Canadians to understand that the loss of local news is a large danger to their communities,” he adds. “They need to support quality, unbiased, professional journalism, and not just expect to get their news for free.”

The Postmedia closures add to the 180 community newspapers and 34 daily newspapers that have been lost in Canada since 2008, according to data collected by the Local News Research Project.

The project is led by April Lindgren, a professor at Ryerson’s School of Journalism, who told The Canadian Press that local newspapers often initiate the news cycle, acting as a provider for larger news outlets. Without their reliable, neutral reporting, she said, we run the risk of more fake news.

In last February’s budget, the government announced it would allocate $50 million over five years for areas with under-serviced local news, but it remains to be seen how that money will be spent.

Although Heritage Canada has said that the funding will be administered by non-governmental organizations, the risk of newspapers losing trust as independent watchdogs by receiving government money could still be a concern, say some journalism experts.

“Obviously the newspaper industry in general has to walk a fine line there,” says Paul Knox, who has written for newspapers across the country and is a professor at Ryerson’s School of Journalism.

“You don’t want any hint of government interference damaging that relationship of trust with the newspaper industry and the audience.”

Winnipeg Free Press publisher Bob Cox has spoken out in favour of some form of government subsidy for the struggling local newspaper industry in Canada. He notes that the Free Press, through Heritage Canada, has been subsidized for decades without any critical neutrality issues arising.

Cox, Knox, and Morse all point to the CBC as an example of government-funded journalism. However, they and others have voiced criticism over the CBC making $36 million in online ad revenues, which they say siphons money away from local online content providers.

Jared Gnam is a freelance journalist based in Vancouver.