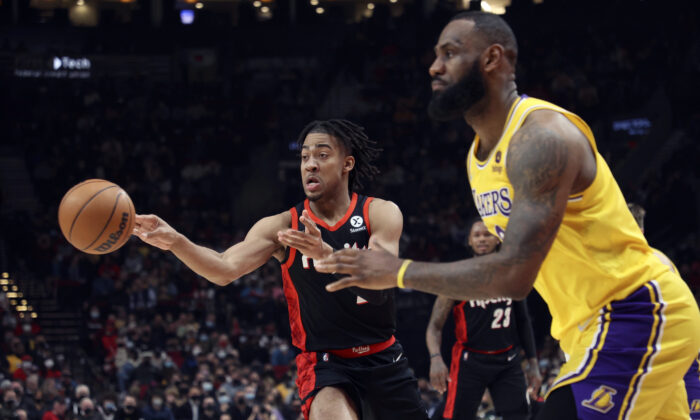 PORTLAND, Ore.—Struggling to find a silver lining after a flurry of trades depleted their roster, the Trail Blazers got some encouragement against the Los Angeles Lakers.

Jusuf Nurkic added 19 points and 12 rebounds for the unexpectedly tenacious Blazers, who kept it close through the first three quarters before rallying in the fourth.

LeBron James had 30 points for the Lakers, who didn’t have Russell Westbrook because of lower back tightness. It was the first game the former league MVP had missed this season.

“Man, it was great,” Simons said. “Just to see everybody playing well, coming together and being a good team. I mean, you can say what you want, but you’ve always got a chance when you’ve got LeBron and AD (Anthony Davis) on the team. So for us to get a win is big.”

Dennis Smith’s behind-the-back pass to Trendon Watford for the basket put the Blazers up 89-82 with 8:41 left. Los Angeles rebounded and briefly pulled in front 96–95 on James’ layup. But Simons’ 3-pointer gave the Blazers a 102–98 lead with 2:41 left.

After James’ dunk, Simons made another 3 that put Portland up 105–100. James’ layup got the Lakers within three points with 27.8 second on the clock but Simons made a pair free throws—and James’ 3-pointer at the buzzer wasn’t enough.

James took responsibility for the team’s 21 turnovers, which led to 28 Portland points and were particularly damaging down the stretch.

“Every time we turned the ball over it was almost like pick sixes. We didn’t get a tackle and they basically ran it in for a touchdown every time,” James said. “That’s not the ingredients for winning basketball.”

Each team was playing the second of a back-to-back. The Blazers fell 113–95 to the Orlando Magic on Tuesday while the Lakers were defeated at home by Milwaukee 131–116.

The Blazers have cleaned house ahead of Thursday’s deadline, dealing away three starters. Among them was guard CJ McCollum, who went to New Orleans on Tuesday. The move broke up Portland’s longtime backcourt duo of McCollum and Damian Lillard.

A six-time All-Star, Lillard has not played since the start of the new year because of an abdominal issue that required surgery. While there is no timetable for his return, Lillard was out on the court taking shots well before Wednesday night’s game

“It always feels good to win, and in the fashion in which we did it—we did it together,” Blazers first-year coach Chauncey Billups said.

Without Westbook, the Lakers started James, Davis, Trevor Ariza, Malik Monk and Avery Bradley. It was the team’s 28th starting lineup this season.

The Blazers kept up with the Lakers through the first three quarters, never letting the margin extend to double digits. Los Angeles led 54–47 at the half.

Portland narrowed it in the third quarter. Ben McLemore’s 3-pointer tied the game at 58, before Simons’ 3 briefly gave the Blazers the lead.

“Every loss is different. Every one is different and this one is definitely disappointing,” Lakers coach Frank Vogel said. “I feel like we should’ve won this game. I’m disappointed that we didn’t and we will get back to work and figure out why we didn’t.”

Lakers: James and Dwight Howard were listed as questionable going into the game. James played and while Howard was available, he remained on the bench. The Lakers hit 11 3-pointers in the first half. Anthony Davis finished with 17 points.

Trail Blazers: The Blazers acquired veteran forward Joe Ingles in a three-team trade with the Utah Jazz and the San Antonio Spurs earlier Wednesday. The Blazers went 1-of-13 from 3-point range in the opening half but finished with 10. Greg Brown III had six steals.

As the Thursday deadline approached, rumors swirled about Westbrook’s future with the team.

Said James: “Obviously it’s something that’s weighing on this group that we’re trying to all get through. It almost feels like fog in the air and we’re all trying to see what’s on the other side of it.”

Let’s Not Get Ahead of Ourselves

While it was a nice win, Billups said it wasn’t a statement.

“I just think we’re still building. This is a fun brand of basketball to play, where everybody’s involved, everybody’s defensively so engaged,” Billups said. “It’s fun like that. We’re pushing the basketball. We got four or five different guys pushing it, trying to get layups. It’s fun to play that way.”