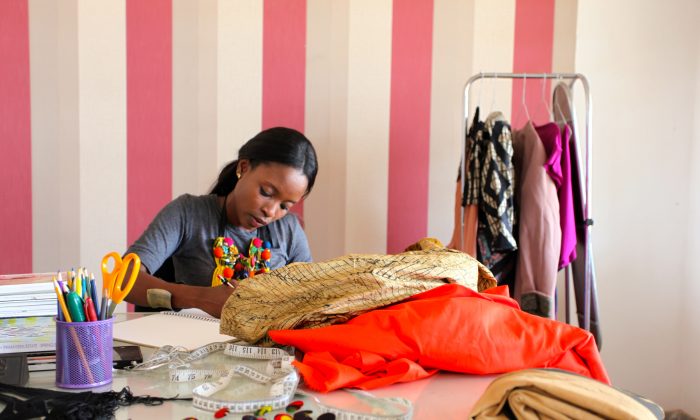 NEW YORK—There is something magical about fashion. A beautiful garment, made out of exquisite fabric, with a unique design, cut to flatter the human form can instantly enhance the way we carry ourselves in the world. The choice of fashion, one’s style, is a most personal form of self-expression, revealing one’s taste, personality and status. If made by highly skilled, well-paid workers with love, the magical effect of the clothes and accessories we wear, what they carry, renders us even more lovely and stunning.

Someone who knows how to recognize and appreciate beautiful fashion products, made in a sustainable way, is Simone Cipriani.

Ethical fashion is about, “Beautiful, gorgeous products with a responsible story behind them, with the role of people in it in the value chain of production,” Cipriani said to a packed auditorium at the Fashion Institute of Technology on March 24.

An Italian man, with a very marked Italian accent, Cipriani radiates an expansive sense of generosity and optimism that’s contagious.

He created the Ethical Fashion Initiative of the International Trade Centre (ITC), which is a joint United Nations and a World Trade Organization agency. In 2007 he proposed a business plan. The UN gave him money for a pilot and was told that if he would fail to involve the industry with workers in Africa, he would be out.

Six years after the launch, the Ethical Fashion Initiative is going strong even with fewer than 7,000 staff and partnering with 29 brands, including Stella McCartney, Vivienne Westwood, Chan Luu, Karen Walker, Mifuko, United Arrows, and Stella Jean.

The ITC enables big fashion brands to connect with high-skilled artisans and designers in very marginalized settings, mostly in African countries like Kenya, Ethiopia, Burkina Faso, Mali and Ghana. They also work in other parts of the world such as Haiti, and more recently, Palestine.

“We have fashion partners that engage with us, and it’s tough to engage with us, but they engage with us in developing the products, in selling them, in conveying the stories and paying people fairly. They do a lot of work,” Cipriani said.

From Artisans to Shock Absorbers

Cipriani grew up in Toscana—”the best part of Italy,” he said with a smirk—known for its rich tradition of highly skilled artisans and the seat of many big fashion brand headquarters.

“These artisans were really at the core of fashion, I would say that they were the heart, the hands of fashion,” he said in a soft tone.

Traditionally the artisans were making products from the beginning to the end—from the design, to product development, to production—and they were paid very well. The cost of labor was as high as the cost of the materials. One of the brands that still operates this way and which Cipriani highly respects and admires is Hermes.

It’s an oxymoron for luxury brands to do mass production.

But that has changed in the fashion industry. Most of the clothes that are bought today are manufactured by cheap labor in a ‘fast fashion’ production chain—not by artisans. It’s an oxymoron for luxury brands to do mass production.

Big brands started to maximize profits by reducing fixed costs. They broke down the production process into several tasks and assigned each task to a person. That brought to birth the type of company that Cipriani calls “converters”—big companies that offer the whole production service to the brands. These converters moved production to places where the cost of labor is very low and then started compressing the cost of labor and converting the artisans into industrial workers.

Now the cost of labor is roughly about 3 percent of the total production costs of converters, according to Cipriani. The cost of the materials remains the same, at over 60 percent. To handle unfair demands—for example unfair market competition coming from China—big brands optimize their costs by lowering the cost of labor.

One of the consequences of such a conversion is that, “The workers of this industry have become the shock absorbers of the system!” Cipriani emphasized. “The second consequence is that we are loosing artisans. It has become very difficult to find artisans who do this work well,” he added.

When the benchmark of remuneration of labor is mass production an artisan is always out of scale and has to accept work that is remunerated to cheap money.

To keep up—if they are able to keep up—Cipriani said that artisans have to be fast runners because the production time has been compressed, they have to be high-mountain porters to carry the burden of having fewer resources, and they have to be gladiators to fight in the competitive market of mass production. In this case the quality of the products may go down, delivery is delayed and as a result, sanctions have to paid.

Pointing to a movie still of Meryl Steep playing a powerful fashion magazine editor in “The Devil Wears Prada,” Cipriani said some brands take such a mass production business model for granted as if it were “something cast in bronze, as if it was something created by God in the beginning of history, but it was created by people!”

They may have corporate social responsibility (CSR) schemes, emphasizing organic and biologically friendly materials, which is very good, but very seldom consider people—the impact on the workers and their stories. Cipriani pointed out the down side. The “industry has become insular, totally disconnected from the roots of society.”

Every time Cipriani would mention Africa his face would light up even more. “Africa brought me back to my roots… I always say, ‘Africa is the new Italy.’ You have artisans you have designers you have couture. How beautiful it is to work in Africa, what a privilege,” he said, spewing a sense of wonder and appreciation.

Through a friend he was introduced to the incredible creative reservoir of Africa in the most unsuspected places, where Cipriani said he had one of the most beautiful experiences of his life, a place where he met very talented, generous, unpretentious people who constantly remind him to give more.

Previously Cipriani worked in the shoe industry providing services to Italian companies in Asia. So he doesn’t take the typical UN approach, of providing training in an authoritative way. Instead he engages with very small informal businesses, creates enterprises that coordinate the work to become the trade interface of the international buyer to pass the orders, along with credit, materials and everything the artisans need to make and supply the product. It is very effective on the job learning and capacity building.

The emphasis is on good working conditions and living wages (above the minimum wage). The EFI negotiates fair labor at every step. In some places they stopped because the leaders of the communities would not guarantee living wages.

About 94 percent of the artisans working through Ethical Fashion Initiative have benefited from capacity building workshops, 80 percent improved the quality of their daily meals, 61 percent were able to save money, and 100 percent of the women artisans said their self-confidence increased and they gained respect from their male counterparts.

“I’m an optimist by nature so I believe in the fact that if you nurture and cultivate the good side of human nature then this will pay back. It’s the same with fashion,” Cipriani said.

Within a year of the Initiative’s launch, they were producing for the Italian fashion group, Max Mara, they produced a Kate Moss bag for Top Shop, and then worked for Vivienne Westwood, and so on.

“When you do things which are right—not because of you—but because by chance, by higher inspiration, you do the right thing, things go well,” Cipriani said.

Consumers want to see the stories. It’s a huge movement that is changing the paradigm of fashion.

Another factor of Initiative’s success is the change in consumers. “People are fed up with seeing bad things, of hearing bad stories of the products they buy,” Cipriani said.

The way the fashion industry uses social media is mostly just promotion, seldom engagement. But “The consumers want to see the stories. It’s a huge movement that is changing the paradigm of fashion,” he said.

Consumers are also citizens who know that the threat to global security comes from lack of justice, which includes lack of justice in economic relationships. So people also want fairness ingrained in the products they buy.

He responds by saying it is indeed like thin air on top of the mountains. He tells them, “Do you know what is the effect of this thin air blown by the wind? It moves the snow from one side of the mountain to the other side, and then the snow accumulates, until one day it comes down in an avalanche and it wipes everything out. This is what is going on in this industry. The snow of people who want to engage, who want to see different products for consumers, is accumulating.”

He is certain the change will happen, but it will be incremental, requiring many small avalanches. To a captivated audience, he said with a wink, he knows because he was an alpinist when he was young.

“I’m an optimist by nature so I believe in the fact that if you nurture and cultivate the good side of human nature, it will pay back. It’s the same with fashion.”

To change the paradigm, Cipriani encourages people in the fashion industry and consumers to put their alpinist gear on, which is to gear their minds to the question, whether when creating a product or buying it: “What share of this product goes to people?”

Where consumers are king, especially in the United States, Cipriani said, “You can engage, as consumers to ask the stories behind the product and people will start getting the stories right.”

Still the general attitude of the fashion industry today is about mass production and fast fashion. Artisans who were at the heart of the system are now a spare part of it—shock absorbers. So, while Cipriani looks forward to a day that the need for his work will become obsolete. For now he has plenty to do, growing together with his partners.

“At the end of the day the dream is to see more and more people involved and more organizations involved,” Cipriani said.