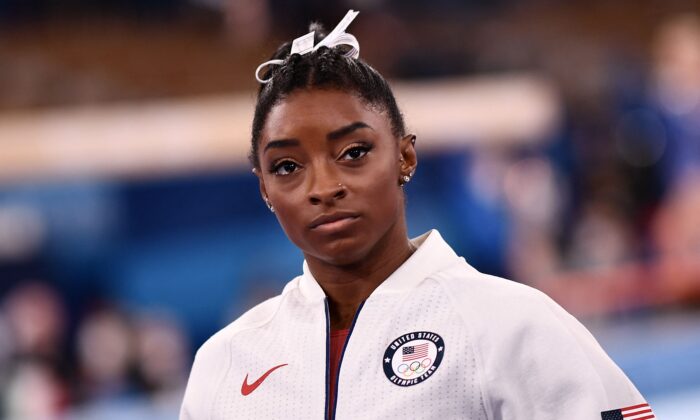 Simone Biles of the United States waits for the final results of the artistic gymnastics women's team final during the Tokyo 2020 Olympic Games at the Ariake Gymnastics Centre in Tokyo, Japan, on July 27, 2021. (Loic Venance/AFP via Getty Images)
Sports News

Olympian Simone Biles is set to testify to the U.S. Senate regarding the investigation into the FBI’s botched handling of allegations against former USA Gymnastics doctor Larry Nassar.

Biles and three other Olympic gold medalists will share their experiences and answer questions before the Senate Judiciary Committee, Democrats on the panel announced Monday.

The hearing is set to take place on Sept. 15 in Washington.

The committee is convening the hearing in light of the Department of Justice inspector general’s report that found the FBI failed to properly investigate reports that Nassar was abusing young athletes.

Michael Horowitz, the inspector general (IG), concluded that FBI senior officials “failed to respond to the Nassar allegations with the utmost seriousness and urgency that they deserved and required, made numerous and fundamental errors when they did respond to them, and violated multiple FBI policies.”

Sen. Dick Durbin (D-Ill.), when Horowitz’s report was made public in July, said that his panel would hold a hearing “to examine this injustice and to prevent future, similar tragedies.”

“The IG report confirms my fears that the FBI dropped the ball, allowing abuses to continue for months. The Judiciary Committee’s upcoming hearing is a continuation of our oversight to get to the bottom of this. The FBI owes the American people an accounting for its failure to protect these children, and explanation for how it plans to do better in the future,” added Sen. Chuck Grassley (R-Iowa), the top Republican on the committee.

After the Olympians testify, Horowitz is scheduled to deliver a statement and answer questions alongside FBI Director Christopher Wray.

The FBI has not denied the IG report’s findings. Instead, the bureau’s assistant director, Douglas Leff, claimed the actions by the senior officials were “not representative of the FBI or of our tens of thousands of retirees and current employees.”

Biles had revealed on social media in 2016 that she was one of Nassar’s victims.

In a lengthy statement, she said what Nassar did was “completely unacceptable, disgusting, and abusive, especially coming from someone whom I was TOLD to trust.”

Biles later said that the abuse she suffered likely contributed to her withdrawing from Olympic events during the Tokyo Olympics.

“Now that I think about it, maybe in the back of my head, probably yes,” she said on NBC’s “Today” show.

She added that she hoped further investigations would reveal “why it happened [and] who knew what when.”